Trapped by the Ice

Our kids have been home all week because school has been canceled.  We have a long driveway that slopes down and it was too icy to risk driving our car on the last couple of days.  If we needed to, I'm sure we could have done it, but a trip to McDonald's playroom hardly qualifies as "necessary".  We actually did go to the McDonald's with a playroom on Friday.  We were there for 2.5 hours and ran into a friend from school, which made it more fun. 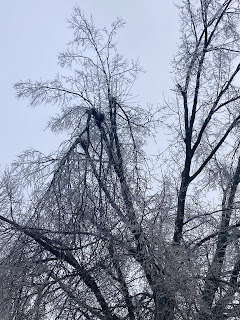 Soccer practice started last Saturday, but was canceled because of the rain.  If Natasha had an earlier time, she would have got it in.  But our practices are 4 pm Saturdays and 5:30 pm Tuesdays along with some extra/makeup days on Sundays and Thursdays.  It seems like the practices and the games are later Start Times this season, probably because the kids are older.

We got a late start on leaf raking.  I put it off.  Some days the weather could have been better.  Some days I had other things to do.  whatever you want.  When I finally got around to dealing with them, there were too many to realistically corral.  I managed to get a good load down by the road so that my neighbor could put them in his composter.  but there is a second load that I haven't been able to move yet because of morning frost making them too wet.  we don't get a good day of sunlight/warms and the blower struggles to move the leaves, essentially wasting gas.  then there's every third day it rains obstacle.

We need to address a lot of yard issues and this is the time of year to do it, but until I get a stable form of employment, I'm hesitant to spend the money.

For those who celebrate.

This is the invoice I got for my garage door.  I'm putting it here for posterity. 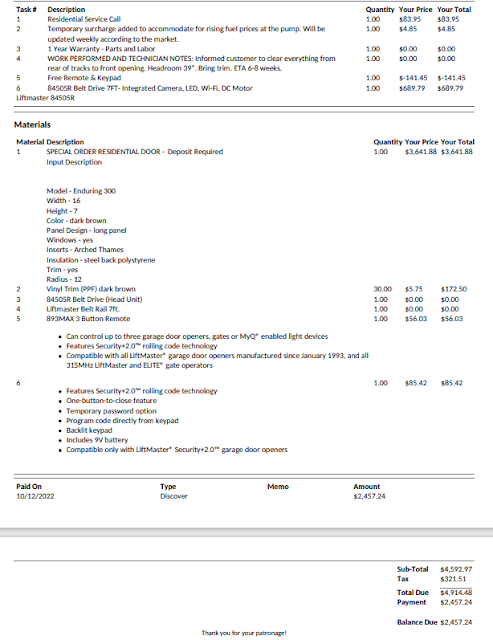 Yesterday Boris was coughing badly and we decided to keep him home from school.  In keeping with the twin tradition, we kept Natasha home too.  They are only in Second Grade so they aren't missing anything important and it eliminates the after-school pickup.

Today the Mid-South is experiencing cold weather and expecting Ice Storms.  The Powers-That-Be made the call last night to cancel school.  So another day with Moose and Squirrel at home, full of energy but not able to go outside and burn it, at least until the snow arrives.

[For anyone new to MOL, I fluctuate between referring to my kids as either Moose and Squirrel in the general sense, or Natasha and Boris when being specific.] 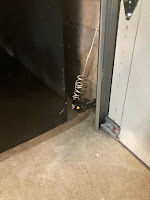 I don't think I've shared this yet so here goes.  Last summer our garage door bit the dust.  It was an inevitability that was accelerated by a delivery person accidentally kicking the door sensor such that it wouldn't sometimes close when desired.  Usually when we needed to close it the most.  We would have to close it manually and that caused some problems too because it's a heavy door and closing it with a car parked under it is challenging.

One particular day when we had to leave on a trip and were down to the wire because that's how we roll, Nightingale bent the door such that it made it harder to close subsequently.  I finally had to surrender and get a new door and opener.  $5000.

So the timeline is Precision came and looked at the door on 10/12/22 and ordered me a new one.  Like everything it takes 6-8 weeks.  It actually was available the week we were in Chicago for Thanksgiving.  Since we had already waited over a month, what was another week.  I scheduled them to come to install on December 1st as that was an easy date to remember and would push back the balance payment another month, or so I thought.

It turns out, the person who came to look at the door failed to notice that one side of the garage entry was lower so when the installer put in the new door, there is a gap.  The installer said that they would have to order some new panels that would hide the gap better.

He asked if I wanted to pay the balance now or after the Gap Remediation.  Guess which I choose.

He also said something about grounding the concrete as well, but he didn't go into detail.  His manager was supposed to call me which never happened and I was not in a hurry to remind them that I exist still owing them $2500.

We finally got a text yesterday asking me to call and schedule the installation.  As I'm in no hurry to shell out more money, I scheduled for next Wednesday, as the weather will be in the 50s again.

As the first month of 2023 comes to a close, I can safely report that the job market sucks.  Every day on LinkedIn someone is posting that they were victims of the massive layoffs at Google, Microsoft, and other big tech companies.

I'm running out of options and losing any semblance of faith I had.  I've reached out to a couple of former colleagues from the No-Name Software Company and their silence has been deafening.

I need to remember that last year I still brought in $50K via two contract short-term roles.  It just feels like I've been unemployed since 2020 because of no benefits like 401K or Healthcare.

In other news, we are in what passes for winter in the Mid-South.  It's not crippling cold, but it's not exactly pleasant to be outside.  We are supposed to get some ice storms this week.  I'm told things shut down when those occur, so there's a good chance I'll cart Moose and Squirrel off to school, just to have to pick them back up shortly after.

Posted by Icarus at 9:37 AM No comments:

Relatively recently, I rediscovered three blogs I use to follow with some frequency.  In no particular order, they are:

Alexis' blog is private so this link won't work, but I'm putting it in for posterity.  20 years ago, I actually knew Alexis when she lived in Chicago.  We have mutual friends and I enjoy reading about her life as an Ex-Pat and her children.  They are a tad older than Natasha and Boris and often I'll read something and think "okay that station is gonna come up soon."

I've never met Lakeview Coffee Joe but he is a Bears fan and our political viewpoints seem to overlap so I'm gonna bet he would be fun to watch a game.  I likely found his blog through Alexis but I suspect the interest was because of some posts about home repair or DIY that piqued my interest.  It appears he doesn't blog as much these days and I suspect it is for all the usual reasons.

Next, there is a guy named Steve Manes who is an IT guru who bought a fixer-upper brownstone in Brooklyn when prices were reasonable and has completely renovated the place.  I use to read him in the late 2000s.  He stopped posting for a while and I had my own stuff to deal with so I didn't check in after enough time had passed since his last post (years).  It looks like he started up again, but hasn't posted since 2019.

None of these people really know I exist and Alexis has only commented here once, on a post about Fiancee 1.0 leaving me.  And while I wish they visited my blog as much as I visit theirs, I long ago gave up trying to get commenters and an audience here. I use to get my page view fix at ChicagoNow where I would get that many a day, occasionally more when I posted something that went mini-viral.

One of the things I often suspected, and have somewhat confirmed, is that many of the people who had successful blogs -- high traffic and earned money -- were in the right place and the right time and had connections that made it "easier" to achieve that.

I'm not saying that they didn't have talent or desired content.  They just got there first and capitalized before the rest of us figured it out.  The early big names who were snapped up by legacy media outlets in this manner had an enormous First Mover advantage.

As a point of reference, I get According to the dubious stats on the dashboard, I get about 1-2K visitors a month for some reason.  At Chicago now, I'd get that on one day.  I'm the same writer. it's just the Tribune Ecosystem was able to reach a larger audience without really doing anything to promote my particular blog.

Posted by Icarus at 3:50 PM No comments:

Final Touches on the Work Room

When it comes to Home Improvement Projects, there are two animals that are common, though entirely opposite.  First, there is the Might_As_Well.  If I'm gonna do X, Might_As_Well do Y.  If I'm gonna paint the walls, I should do something about the floor.

And then there is Home Stretch Complacency.

"The symptoms of HSC are, after spending years on a difficult and time-consuming renovation project, crashing on the last lap. That final room doesn’t get done, the trim doesn’t go up, and the primer doesn’t get painted. You sink into lethargy and just live with it."   Brooklyn Row House

I really should finish painting the floor of the workroom.  When I started last year, I knew I wasn't going to have enough paint to cover the entire floor but I didn't realize just how much "not enough paint" I would be short.  It is less than 9 sq ft. 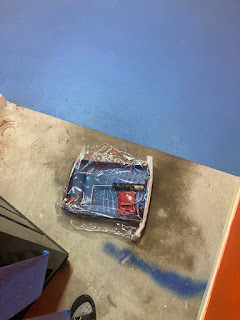 This was too little to justify buying another gallon of paint from the Big Box Store.  I would have had enough if I hadn't used two coats for the front porch stoop, one was enough.  I did find a local shop that mixed me a quart of paint, so I'll see how well it matches when I finally get over the HSC. 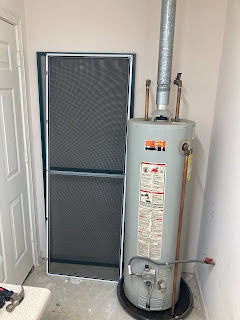 The other reason I'm not in a hurry to paint the floor is the last part is also where the water heater is, and that will slow down what would otherwise be a quick painting project.

The good news is that I installed a frameless mirror that was lying around (behind the water heater for its own safety) and not being used for anything.  I have some floating shelves that I want to install and place some of my frequently used power tools and their batteries on.  I'm waiting to see how the flow in the room works now that it isn't as cluttered as when I inherited it.

Posted by Icarus at 9:41 AM No comments: