The scale really does lie, depending upon where it lay

﻿ ﻿﻿ ﻿﻿
Yes I know, shame on me for posting pics of my ugly hairly legs.  I like to weigh myself second thing in the morning (after my first coffee and constitution) and I've confirmed that where I put the scale does seem to impact my weight results.  By as much as 2 lbs apparently.

I would also like to note here that today while driving to work I noticed that I felt like I had a touch more energy and the desire to work out.  I believe it is because yesterday after work I went to the gym in my office building and in addition to running 4.5 miles on the dreadmill (1 mile warmup, 3.5 run), I also got in some weight lifting.  I was able to do this because Nightingale was going to be coming home late so there was no pressure to rush home to see her like I usually do.

Things that live in the garage

The organizing and reshuffling of things that live in the garage continue.  This time a little asthetical surgery on the garage.  The blinds the owner left behind were covered in layers of dirt and dust.  I didn't want to bother hosing them down.  I figured I'd just find some replacements at a thrift store.

Then it occured to me, while sitting on my deck enjoying an adult beverage and staring at these ugly blinds, that I could put a picture or two (or even three I suppose) in that space and point them back out to the outside.

Lo and behold, the Goodwill near my office had a couple of matching pieces of wall art that I thought were nice enough for a garage window.  Alas, Nightingale feels these may be too nice for a garage and despite my claim that the frames are a bit beat up, these may end up in the house and I'll be back to the drawing board.

At the same Goodwill, I came across this item pictured below.  My city saavy told me this was a duck but Nightingale informed me it was a goose.  Either way, it will go on our front lawn in the spot that often pools during heavy rain making an impromptu pond.
﻿﻿ ﻿﻿ 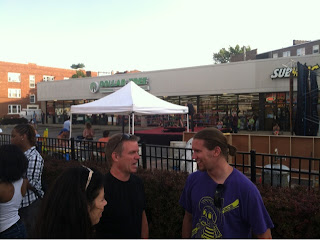 We also invited some friends over Sunday to check out BBQ Fest and hang out at our place under our new deck umbrella that we had to buy because the sun beats down on our uncovered deck like no one's business.  Nightingale wanted to get people to come spend time and perhaps a little money at a fest in our hood in hopes of increasing it's draw power.  I figured this is a good beta test for a what a bigger scale cookout sometime this summer.
Posted by Icarus at 1:00 PM No comments:

Saw this on the way back from BBQ fest yesterday 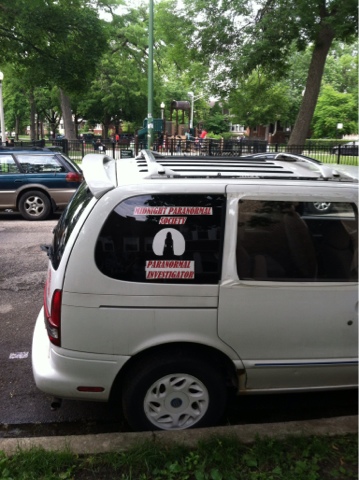 Posted by Icarus at 9:20 AM No comments:

We went to two wedding in one Saturday a couple weeks ago and I suppose I should say something about that. Because we made the effort, the first party sat us at their table as guests of honor, which I believe was quite classy, if rather unnecessary.

This of course had the intended benefit of us staying a little longer than planned such that we got to the second ceremony just in time to receive our second communion of the day.

We were seated with Sabrina who was one of the few single women there so she got a lot of attention from a couple of the single guys. Never got the 411 on what happened though there was a FB post later that evening showing everyone having a good time.

While that picture was being taken, we were at the second reception, sitting with a group of the bride's coworkers. They were a nice friendly enough bunch to get through the evening with no expectation of long term bonding. The gentleman next to me was excited because he and his son had run the SF10 together. I mentioned that I had run it too but didn't share my results as that would have seemed like boasting.

The reception was at a golf club on the south side and it was a dated but elegant club. Couple two hired a live band from the Red Hat Piano Lounge and really wanted people to come out and dance so we obliged.

We made a short term friend at this wedding who was interesting to talk to although I cannot remember her name. I guess that term ended.

I should say something profound about these couples getting married relatively later in life than they had hoped.  Indeed, I'm all out of profound these days.. So how about this instead.

How a Runner Packs for a Trip

We are out of town visiting the SIL and staying in her new house in The South.  She works in Memphis and therefore, like many of that town, bought a home in nearby Missisippi.  Hernando, MS to be specific.  We got to see the new house and meet the new boyfriend.   The house is cute and the BF on good behavior, nothing wrong with either at this point though we aren't looking very hard.
﻿ ﻿
We've had our own rough month with the basement flood and some more financial drama in my mom's world that is impacting us.  We just cannot seem to catch a break.  So I would say a short trip away from it all is just what the doctor ordered.  The weather here is mild for this time of year but much warmer than the Chicago weather we left.  When we leave, they will get their hotter temperatures and Chicago will hopefully be done with the cold and rain for a while.  Everyone wins except my waistline since the food here is delicious but not remotely in the zip code of healthy especially the mass quantities I have and will ingest throughout this trip.

What I don't think that doctor ordered was an additional side of Getting to the Airport Drama but that is life with Nightingale.  We couldn't get our act together and make the bus to the El station, so we had to drive nearby and park the car on the street.  Hopefully it is still there when we get home, unticketed at all. 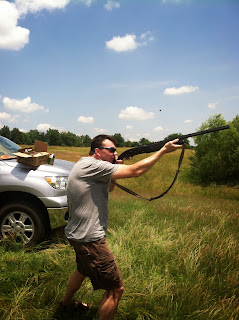 Anywho, I've probably shared too much especially since I think some of my actual relatives have started to read this blog occasionally.  Therefore I will just leave with another picture, this one of me culling the Skeet population which grew larger than average thanks to a mild winter.