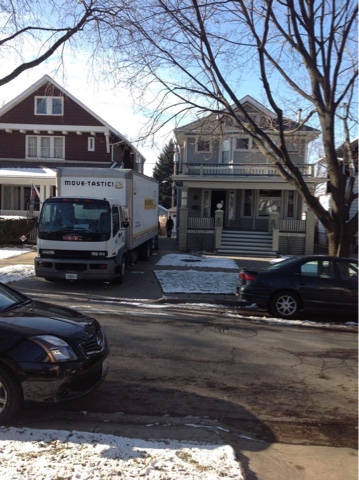 According to Facebooks On This Day, we moved into our home 4 years ago today.  We had closed on November 30th and moved a few minor items in, mostly to get them out of our cluttered condo.   We also wanted to have the place painted which is much easier to do with no furniture in the way.

The move was not painless, however.   I was sick and not moving quickly or thinking clearly.   We ended up leaving an expensive power cord behind because it was attached to the computer desk that the moving crew just couldn't get out of our unit.  Had I been thinking clearly, I would have insisted that they waive the insurance fee that we didn't end up using to claim the destruction of the desk.  Also, this crew took their sweet time even though we didn't have too much left to move since we had taken a lot over ourselves.  It boils my skin to recall this so I'm just gonna stop writing now and hit publish.

Today I was finally able to get our for a run.  I did 4 miles at a 9:30 pace, which is very respectable for me these days.  I severely underestimated how challenging it would be to get the last 10 miles I needed for 300 miles this year.  I really had planned to get my miles in long ago and just rest the rest of the month.  Now I have to get 2 miles in tomorrow, perhaps on the treadmill.

Update:  so I did the last two on the Dreadmill on New Years Eve as the kids were sleeping.

Posted by Icarus at 1:14 PM No comments:

Time to take the tree down

We usually wait until Ephiphany Day to take our tree down, more out of laziness than religious reasons. However, since moose and squirrel cannot keep,their hands off the tree or its ornaments we opt d to take the tree down sooner.
It's better to do it now anyway because we have so many kids toys that we need the space and we happen to be off from work. 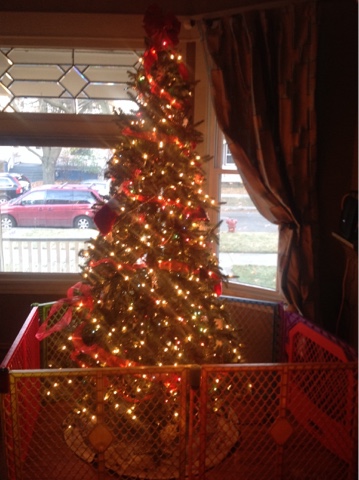 Posted by Icarus at 8:00 AM No comments:

We are in Michigan once again for the annual Christmas get-together with Nightingale's family.  We had a rough trip up here this time for a couple of reasons.  First, my mom who has been sick for over a month finally went to her doctor at the last possible minute and got put in the hospital ICU because she has pneumonia.  We told her to go sooner but she was too stubborn to listen.

Naturally this screwed with our plans.  We had taken Thursday off in order to pre-pack and get ready for the trip.  But since she was in the hospital we had to devote a few hours to feeding her cats, moving her car and bringing her a change of clothes.  This cut into our kid-free time and we were too exhausted to pack Thursday night after they finally went to bed.

The next day we got off a little later than we wanted.  We made excellent time because the roads were clear and weather was nice.  However, in our rush to leave, I forgot to put Nightingale's suitcase in the car.  We did not discover this until we got to Grosse Pointe!

Also, Natasha decided not to take a nap in the car ride until the very last hour when she literally passed out from exhaustion.  The kids sleep cycle has been totally out of whack this entire trip, though Boris has at least gone down for a nap a few times.

So I decided upgrade our living room to stand for reasons.   First, out kids could easily reach the tv on the old stand. Second, this one looks nicer and fits the room decor better.  Third, I don't really have a third so I'll go with this one is a tad more functional than the last one.

Of course it only took Natasha a day to figure out how to use her chair to get back up to the TV so there it goes. 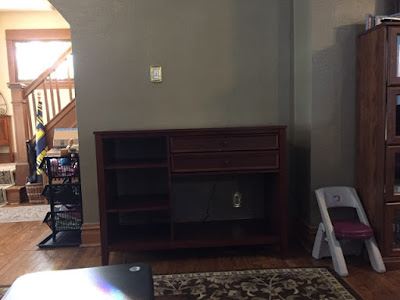 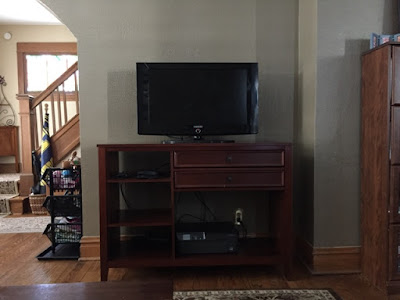 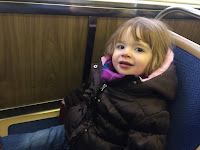 It's getting harder and harder to get the children ready and out the door each morning in a timely fashion.  The latest is that one or both don't want to get out of their pajamas and into their clothes, let alone let us even change their night diapers.  Our theory is that they want to move at their own pace

Usually one or both of them wake up in the middle of the night and want to sleep with us.  I will take the second one and go into the guest bedroom and hopefully I can fall back asleep.

It's stressing me out because even though I don't punch a clock at work, I really cannot get to the office late and still leave early for the pickup at Daycare (to say nothing of squeezing in a lunchtime workout). By the time I get to work, my team has already been working for almost two hours.

Then there is my mom.  She has been a big help these last few months when she could take the kids to school and pick them up for us.  She also has picked up some housekeeping chores like doing our laundry and our dishes.  When it comes to getting ready in the morning however, she isn't much help when she is healthy, and she is not healthy these last few weeks. 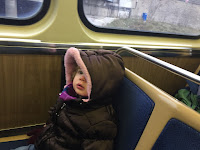 and unfortunately we only have so much morning to work with.   If we are lucky enough that they sleep through the night and the insomnia gnome doesn't attack us, we get them up by 6 and let them slowly adjust.  But most mornings are not like that at all.
Posted by Icarus at 1:10 PM No comments:

With the end of the year approaching I'm not sure if I will reach the official and unofficial targets I set for myself.  I need 15 10 miles to hit 300 for the year, which would still be only about 60% of what I
had hoped to pound out this year.  With any luck I should be able to get 5 miles done this week and 5 miles done next week and that will do it.

I try to post 8-10 times a month here but will likely fall short of that too.  I won't hit 600 page likes for my FB fan page that's for sure.  It took forever to reach 500 and then next 60+ seems just as long.  The Facebook Fan Page is really an insane thing and I don't know why I keep trying to manage it.

Speaking of Facebook, I want to drop about 150 friends just because.  When I first joined, I thought it was great to have a place to record everyone I've ever met.  Now, not so much.  I'm still wrestling with who to cut and why.  I need to stop overthinking it.  Why should I keep someone I use to run with a decade ago on my friends list especially since we don't interact in any way, shape or form?

Well because every time I delete someone it appears to change the algorithm and suddenly I see people i haven't seen in years and people I haven't heard from in years suddenly interact with me. 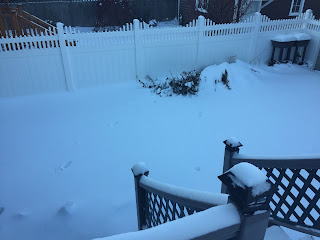 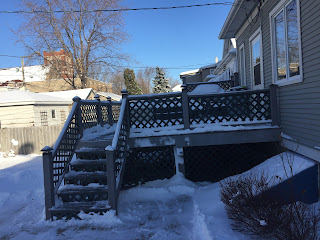 Posted by Icarus at 3:00 PM No comments:

We have downspouts again

Some time ago, a scraper removed one of our gutter down spouts from our garage.  Nightingale said she heard something and she went to investigate, opening the garage door which apparently sent them away before they could get the other one.

I finally was able to get someone to fix it for me by piggybacking the work on an Angie's List Deal for 2 Hours of Roof, Siding, and Gutter Maintenance ($99 + $20 for the downspout and labor). 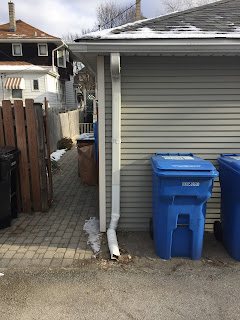 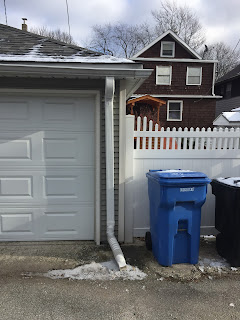 The only downside is that vinyl wasn't available so we had to go with aluminum which means we could end up losing these again.

Posted by Icarus at 2:17 PM No comments:

Weekend and a weird dream 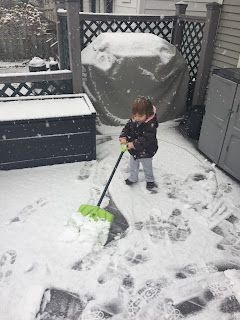 I've become a big fan of the only schedule one thing for the weekend model we are currently running under.  We need our weekend downtime to recharge and recuperate as much as we can from the busy week and Moose & Squirrel.  We can handle more than one thing, but it takes a lot more energy, focus and effort.

This weekend was about the Family Picture for the holiday cards we'll send out soon.  We actually had the appointment for last month but rescheduled because of various reasons.  We probably should have sucked it up and did it that weekend but then something else would have filled this one so it doesn't really matter.  Natasha was wonderful and posed beautifully.  Boris was not as co-operative.

I've been fighting whatever Virus-Of-the-Week they brought home from daycare so when they went down for nap, so did I.  Which means we didn't put our outside Christmas lights on until nearly dusk.  I did manage to rake the leaves on Saturday and Bag them Sunday just before the snow arrived.  Of course the snow caused most of the remaining leaves to fall from the trees but that's actually a good thing because once the snow melts, I should only have to rake one more time. 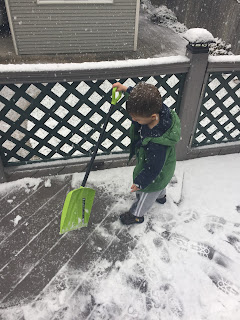 I did have a Hall Pass to go to a friend's party.  However, because I was sick, I felt it would be right to bring my virus to a roomful of mostly single people.  Why ruin their fun?  That's what New Year's Eve is for.

Weird dream:  Sometime between 4 and 6 this morning, during the last block of sleep time I managed, I dreamt I was at a wedding reception, talking with my runner friends.  For some reason Sarah Spain was there and at one point I said to her about my running achievements: "I was never great, but I was good."  There was something else which I cannot remember.  I think this got her attention and made her more sympathetic to my never BQing.

Not sure why virtual friend and Sports Expert is in my dream about weddings and running but perhaps it's my body's way of saying let's not give up just yet.  Speaking of....

The following is not a criticism or indictment, it just is:  When I WFH, I like to go for a run before my work day begins.  I didn't get to do that on Friday because we got off to such a late start and I had a plethora of meetings, plus I was feeling like crap anyway and dealing with a dead car battery.

I'm trying to get 20 more miles in for the year and would really like to just get it over with.  With 25 days left in the year, the only me would have just done 4 5-mile runs.  The latest me might be able to get 5 4-mile runs in, but if I have to do 3 milers, then I need to find 7 days between now and the end of the month.

Bears Bonus:  The Chicago Bears are averaging one win per month, or starting QB.  They also finally kept an opponent out of the end zone for the first time since 2012.  The hapless 49ers did themselves no favors by excessive celebrating in the end zone on a TD that wasn't.  We don't like other teams taunting us in the end zone around here.

Posted by Icarus at 4:35 PM No comments: