My career path is loosely based on the product I supported when I worked at the No-Name Software Company. Like a lot of industries, it’s very incestrious and you see the same people over and over again. Only the job titles and paycheck providers have changed. My current role brought me to the No-Name Software's office building a couple Fridays ago.
﻿
It was a strange feeling to be a customer back in the building where I spent so many years as a support engineer. This is actually the second time that has happened since I left, only last time there were more people from the old crew to visit. I don't really know anyone there now.

It’s also a little sad because the No-Name Software Company was my first job after G-school.  I loved working there until some culture changes made it unpleasant.

You always hear about those lifers at IBM who retired with boatloads of stock and are set for life. That should have been me and some of my colleagues, had we not been forced out of there.  Essentially as the company got bigger and the workload increased faster than we could keep up with it.  That's what happens when only half the call takers take calls.  Those who were not part of Director Palpatine's hand-picked band of merry asskissers had to go.

Posted by Icarus at 6:30 AM No comments:

Have I ever mentioned that Runners are Narcissists?

Apparently the Easter Bunny was supposed to bring babies not chocolate: Easter was mostly good for us. We went to my aunt B's house  in Roselle and fielded questions about if we were pregnant, when we are getting pregnant and why we don't simply buy a house in the suburbs already. Even though Cousin Wednesday is already with child, apparently the rest of us – Wednesday’s brother’s wedding was about a month after ours -- have to get with the program and bring about the next generation.

It seems strange to field questions about our reproduction plans, especially when we are supposed to be such an enlightened society and consider that 1) some people want children and are unable to have them, 2) if you are preggers, protocol suggests you wait about 3 months to share the news and 3) some people are unable to have children. My family, like most I suspect, ignores these considerations, especially #2 which exempts close family I suppose.

The simple answer is while you really cannot completely control when/if you get pregnant, we need to put it off a little bit. Now that Nightingale has passed her Nurse Practitioner Boards, she needs to find a suitable job – one with better hours than she works currently. It wouldn't be right for Nightingale to start a new job and then go on maternity leave, nor would anyone hire her if she were already pregnant during interviews.

Sidenote: Cousin Wednesday was release from her teaching position while 8 months pregnant. Not sure what happened since you don't fire a pregnant woman in CA unless she kills someone AND you have it on YouTube.

We also agree that we want one more Summer of Fun. By that I mean since we've been together, there has always been grad school, and crappy work schedules, and later wedding planning, and more crappy work schedules. This is our first summer since we met that we don’t have any major obligations than house and job hunting. We can hopefully enjoy street fests and cookouts and hanging out with friends.

When I first started doing these races, I had no one to meet up with before or afterwards and it was kind of depressing. Then I joined a running group and became part of the running community. At any given race, I’d see dozens of runner friends. This would sometimes cause conflicts because different groups were having different post-run parties and it becomes social poker picking one.

﻿
﻿ Now it’s getting to the point where I don’t see many running friends anymore. Some say the event has gotten too corporate. To be sure, the hassle of the expo is getting to be more of a PITA and less of a runner swag free-for-all. It’s no fun registering for a race 6-12 months before because it sells out quickly and the field has increased exponentially since the early 90s.

Luckily, I’ve run the race so long that I seem to get a preferred started despite my diminishing speed each year.

My best time for this race is a 32:04 in 2006 when I was in my peak running condition. Since then, my finish times have gone up slightly each year. This year I finished with a 39:25 -- ironically the same time I ran it in last year. I did okay for a 42 year old who is losing his running god powers.

I don't get to bitch about it though because so many of my friends will never do it in 39 minutes let alone 32. Not to mention that my finish time is still in the top 25% of categories (12% overall, 22% gender, 21% age group).  We will probably run this race one maybe two more times before we call it quits for good.  Not because of my ego but hopefully because some day, my kids are bitching that they didn't quite break half an hour for their nth Shamrock Shuffle.
Posted by Icarus at 10:30 PM No comments:

Of all the architecture styles of homes, the two types of houses I really won't consider are bungalows and ranch houses.  Although I'd probably warm up to a bungalow if I knew I wasn't stuck in it forever.  Several weeks ago, we did look at a bungalow in Portage Park that had this pool table and bar. 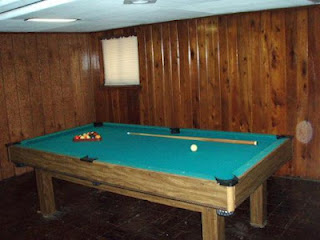 How could you not want that as a man cave?  Sure the wood paneling would have to eventually go.  This bungalow is actually in decent shape with an updated kitchen but overpriced for the neighborhood, which is probably why it is lingering on the market.  According to Redfin, this bungalow has been on and off the market for over a year.  The agent called me a few times to tell me of other open houses he was hosting and of course offered to set me up with emails with new listings as they come on the market. 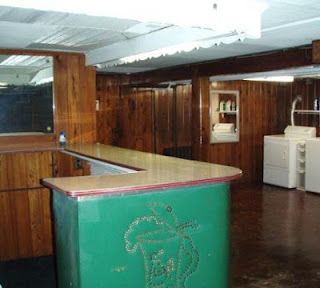 On Sunday we looked at a house that demonstrated just how far apart Nightingale and I might be on our Forever House criteria.  The house was is in (or adjacent to) Schorsch Village.  Unfortunately, it was a ranch which I cannot imagine warming up to under any circumstances. Not only do they not do it for me in terms of curb appeal, but I also feel like a Hobbit living primarily below ground.

Nightingale said the house winked at her. Upon closer inspection, it was more that the house would solve a lot of our current "problems". It's large enough that her family could come visit and stay with us for an extended period of time without everyone being on top of each other. The downstairs actually has an extra kitchen so it could be an in-law arrangement for my toxic mom who will eventually have to come live with us once she loses her crapshack. It also has a rare attached garage and an amazing yard.

It did need some updates to drag it kicking and screaming out of the 80s.  The carpet needed to be replaced and the cabinets would have to be painted or color shifted.  It also is a bit more West than even I was considering.  Other than being close to Prague Cafe and the Brickyard Mall, the walkability factor just isn't there.
Posted by Icarus at 9:30 PM No comments:

If you are one of my five readers, you may have noticed that my posts have taken a sharp downward spike.  That's because the wind has been sucked out of my sales.  A short while ago, I got an email from the Google Adsense robots. Apparently they detected some invalid activity which is Google's euphemism for click fraud.

After reviewing our records, we've determined that your AdSense account poses a risk of generating invalid activity. Because we have a responsibility to protect our AdWords advertisers from inflated costs due to invalid activity, we've found it necessary to disable your AdSense account. Your outstanding balance and Google's share of the revenue will both be fully refunded back to the affected advertisers.

It's more than suspicious that they send me this just as I was approaching the measley $100 minimum required before they will cut a check.  I checked some online discussion boards -- yes using Google to search -- and found that I am not the first publisher to coincidentially be deactivated just as they approached the $100 mark.

Because we have a need to protect our proprietary detection system, we're unable to provide our publishers with any information about their account activity, including any web pages, users, or third-party services that might have been involved.

Translation:  we cannot tell you what we think you did that is wrong but we are sure you did it and will carry out our sentencing accordingly.


Once we've reached a decision on your appeal, further appeals may not be considered, and you might not receive any further communication from us.

Yeah you can argue your case but as we've already made up our mind, you might as well not bother.  And don't email or contact us as we will ignore everything from you in the future.

This sucks so much.  They won't tell me what misappropriate action they think i've taken and they won't correspond with me beyond the appeal form -- a generic form with small text fields so you cannot really articulate a response and then they decide they will not communicate further with you.

Okay then, time to uninstall all google apps and go with BING.
Posted by Icarus at 7:30 PM No comments: