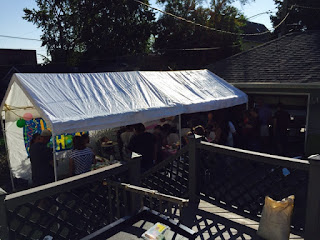 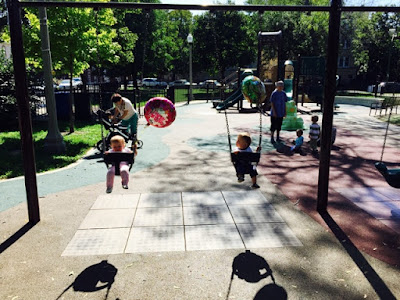 Posted by Icarus at 7:51 PM No comments:

In mid-August, Nightingale decided that we should go up to Michigan and see The Fam for a day.  We left early Saturday morning, arrived at the farm just before dinner time.  We ate lunch at Cracker Barrel on the way up, which is economical and kid friendly if not quite healthy.

(Update:  on a recent trip to Michigan for a wedding we stopped at the very same Cracker Barrel and they do have a healthy menu option.)

On the way back, we stopped at this old school restaurant called Schuler's Restaurant and Pub. 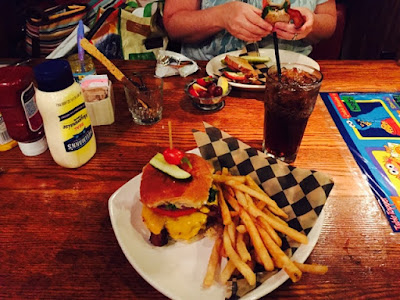 It was a bit more pricey of an experience than Cracker Barrel and while no one gave us strange looks (the wait staff even doted on our kids) Nightingale felt it might be too old school to be considered baby friendly.
Posted by Icarus at 11:39 AM No comments:

About that Running Thing

I just got back from a 3 mile run which  I did in the amount of time I use to be able to run 5 miles in.  Because I don't cover any distance as effortlessly as I use to, it takes longer for me to squeeze a run in, which usually means cutting the run shorter than I envisioned when I set out (a 5 mile run becomes 3).

Additionally, if I don't run for a week or more, I don't feel any tweaks or pain when I run, but I'm starting back at ground zero in terms of endurance.  If I run every other day for a week, it can sometimes be hard on my body. 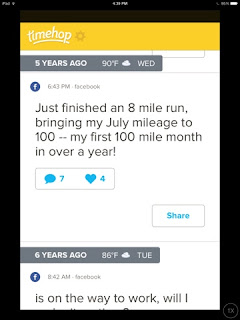 I do have the running stroller and now that Boris and Natasha are old enough to handle the impact of being in a stroller moving at high velocity (relative to them anyway)  I do take them out on runs during the weekend.  Hopefully a running revitalization can come out of this.
Posted by Icarus at 6:30 PM No comments:

A House that caught my eye

This is a house in Gross Pointe, MI that interests me.  And by that I simply mean that it caught my attention when I was walking Moose & Squirrel in their stroller one morning.  I think I like it because it reminds me of a house that was just off the town square of Kirksville, Missouri when I went to school there.  I also dig the carport and love that it has a driveway and garage in the back along with the carport. 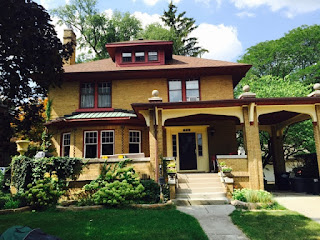 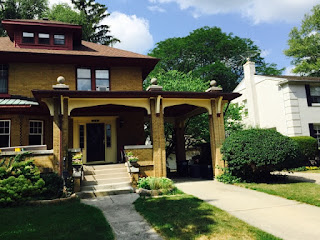 Posted by Icarus at 7:30 AM No comments: 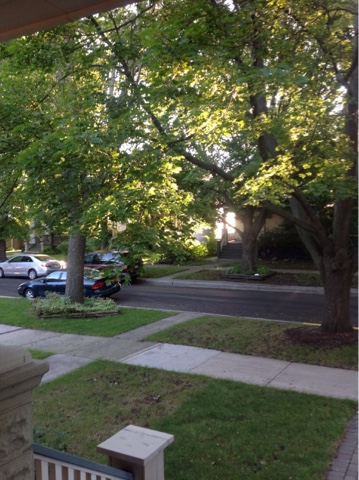 Posted by Icarus at 3:21 AM No comments:

For some reason, the person who owns the white SUV, really likes this parking spot.  She purposely parks in that one, taking the extra effort to back into it.

Whereas I like the one I'm in because at least to one side, no one can park next to you.  I've seen the lady park in her spot even when the one I like is available. 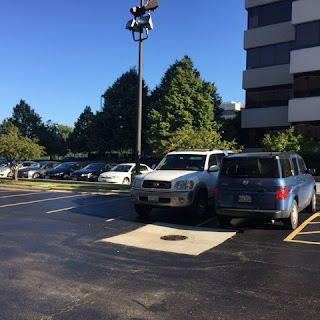 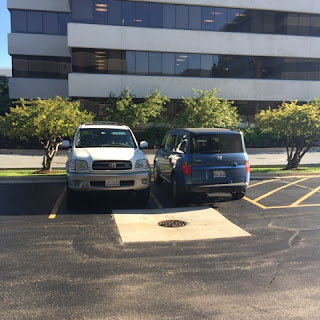 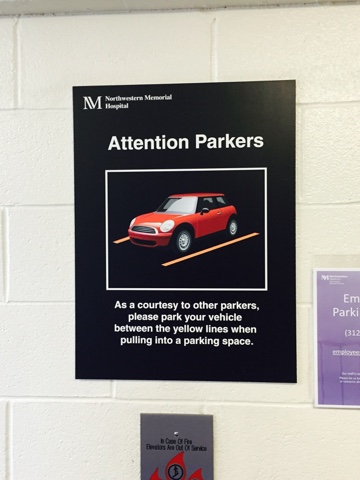 We do live in Great Times


Like all Old People, when I was growing up, you had to wait for your favorite program to come on the air to watch it.  Or when video rentals were the thing, you had to still go out and get the movie and bring it back home.

Which brings me to this point.  I haven't watched A Nightmare on Elm Street in years and have no real desire to do so.  However, there was a scene I was often trying to recall. Nancy, the protagonist and main character, is in a classroom and she is falling asleep as a student reads from Shakespeare.  Working off memory, I knew the line had something to do with troubled dreams.  Try searching Shakespeare for dreams and you will find too many haystacks to sort needles from.

So today I went to Youtube and searched on Nightmare on Elm Street School Scene and voila, there it was (it even came up in auto-suggest).  It's formally named Nancy's School Dream Scene.

The Shakespeare being quoted is Hamlet Act I Scene I where a Ghost appears to Horatio, Bernardo and other guards.  Once I had the first few sentences I googled and found this:

In the most high and palmy state of Rome,
A little ere the mightiest Julius fell,
The graves stood tenantless and the sheeted dead
Did squeak and gibber in the Roman streets:
As stars with trains of fire and dews of blood,
Disasters in the sun; and the moist star
Upon whose influence Neptune's empire stands
Was sick almost to doomsday with eclipse:

The reader in the movie jumps to which is either to show how much time has passed since Nancy fell  alseep or Wes Craven taking a little liberty with Shakespeare:

Hamlet:
O God, I could be bounded in a nutshell, and count myself a
king of infinite space—were it not that I have bad dreams.

Posted by Icarus at 1:02 PM No comments:

Today is the 14th anniversary of the day Evil struck America, or at least reminded us that we are vulnerable and not the little darlings of the world and there are people out there who truly hate us, not entirely unfounded.

I've written a couple times about September 11, 2001 here and here.  I don't feel any safer than I did before 9/11 nor do I feel any less safe.  I feel that all the hassle we go through at airports, the cost of the TSA and the No-Fly lists that cannot distinguish between a 4 year old boy and a terrorist are just a colossal cluster fuck that we could really do without.

I do absolutely hate Bush for the Patriot Act and the creation of TSA. I also have a hard time believing his lack of action directly caused 9/11. Posted by Icarus at 7:01 AM No comments:

I know nobody wants to read a hundred pleas per year for the kinds of things a dude with a blog is supposed to request. I appreciate your patience with the following paragraphs.

Just a reminder that if you aren't following Mysteries of Life  on Facebook and/or Twitter you don't know what you're missing:

What guys who bike to work want me to think: 1) They're fit 2) They're green 3) They save money What I really think: 1) They got a DUI
— Exploding Unicorn (@XplodingUnicorn) September 2, 2015


There's more to it than a bunch of links to posts. It's a little heavier on humor and lighter on stream of consciousness rambling compared to this site. And I'm obligated to try to boost traffic and build a base of readers and all that stuff. So do it.

And don't forget to read/subscribe/follow the commercial blog too.
Posted by Icarus at 8:50 AM No comments:

Some patterns have emerged 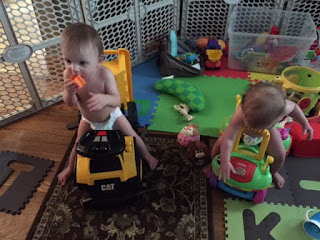 So I woke up at 3:30 on my own to use the bathroom.  A few minutes later, my son was up.  I could tell he wasn't going back to sleep just by putting a pacifier back in his mouth so I made him a bottle. While feeding him, my daughter woke up.

On the plus side, I did make it to the gym before work for the second time this week.  I don't know why I didn't figure this out earlier.  Since the babies arrived, I have made it to work pretty much at 8 or earlier compared to my previous 8:30 start time.  Unless I had a 9 am call, I could easily have gone to the gym first, take my time getting a good workout and shower in, and still be in the office by 9ish.

Something made me think of one of my law firm adventures when I was a paralegal at Big Bucks 1.0 and then I saw this:


"All you need to know is that yes, there is a club. And you're not in it. You just happen to meet a few of its members here and there."  --  Ed from Gin and Tacos

One time I was working late at Big Bucks Law Firm 1.0.  I believe it was even a Sunday night before we were scheduled to go to trial the following Monday morning.  I was in a conference room on the floor working on some demonstrative exhibits.  The ASSociate on the case walked in and said "I need a copy of this" holding up some document, probably an exhibit.  He had walked past the copier room to get to this conference room to interrupt me to stop what I was doing in order to make a simple photocopy!

Remember we had an ethical obligation to only spend
Posted by Icarus at 9:39 AM No comments: