That will teach me to be responsible

My place has been on the market for three months and while there have been repeat showings, no offers have come forth. There hasn't even been a showing since mid-April. I did lower my asking price, but now that the Tax Credit has expired, I really don't expect any thing to come of it. We did get positive feed back from all the agents and potential buyers.

The thing is, my place originally offered parking. However, to afford the seller's market of 2003, I had to give up the parking spot to get the seller to lower his asking price enough so that I could afford it. At the time my income from the No-Name Software Company could only cover so much, especially since I was still paying off my g-school student loan.  Could I have gotten a loan to cover the full asking price? Probably, but I opted to be in what turned out to be the minority and only buy as much home as I could afford.

So I did the popular 80/15/5 loan where you put 5% down and got a Home Equity Line of Credit for the other 15% to avoid paying PI. Over the years I dilligently worked toward paying off the HELOC loan who's rate followed prime. Between selling off stock options and using my tax refunds, I managed to get a $30+K loan down to about $5K over six years.

And my reward for being a good citizen and home owner: I now have a home that isn't worth what I paid for it, and I apparently cannot sell it becuase I wasn't selfish enough to overspend for parking six years ago. It isn't all bad. I was able to at least refinance last December and got rid of the worthless HELOC (when the housing market busted, Chase thanked me by freezing my line of credit so I couldn't use it.)
Posted by Icarus at 9:32 AM No comments: 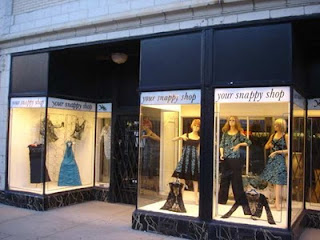 Almost every day on my way to work, I pass the Your Snappy Shop at 3544 W Irving Park Rd , just before Central Park Rd.  I have yet to walk into the shop -- it appears to cater to women only -- but I am just curious enough to make a visit.  This shop strikes me as a throwback to a different time.


A quick google search tells me that this retail store provides elegant dresses at affordable prices.  Again, not of direct use to yours truly per se, but as I have tons of lady friends who often lament about having to go to another wedding or banquet and not being able to afford a new dress -- and they cannot use the umpteenth thousand brides maids dresses they already own because one other person has seen them in it -- I could recommend this place to them.
Of course that presents another challenge.  Many of these aformentioned people don't realize that Chicago extends beyond Ashland Avenue. They believe that if you go west of Western, a dragon will swallow you up whole and spit out your bones.
This has its advantages and its disadvantages. The advantage is that when the day finally comes, I'll be able to buy so much house and still live in the city, The disadvantage is that when I want to have friends over, most will suddenly come up with some incurable disease or ailment that requires them to stay at home. 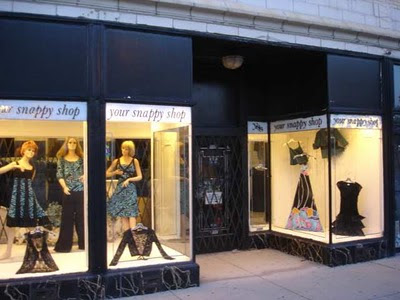