DailyMile is going the way of the DoDo

I've been using the DailyMile website to track my running since December 2011.  It served its purpose but I can tell that the site is sorely in need of code updating, which it will likely never see because whoever is/was behind it, couldn't figure out how to monetize it.

DailyMile came too late to the game.  This would have been a wonderful thing in the early 2000s when not ever runner had a Garmen or other GPS watch device and would have loved a simple tool to keep track of their mileage.

In lieu of the expensive GPS watches, a lot of us runners used a poor person's tool at USATF.   This clumsy website was just good enough to let you map out a route and share with others, although most runners, I suspect, just used it to figure out how many miles they just ran.

Had it partnered with USATF, perhaps it could have found its niche.  Instead, when DailyMile came on the scene, it tried to be like if Facebook if Facebook were a Running App. 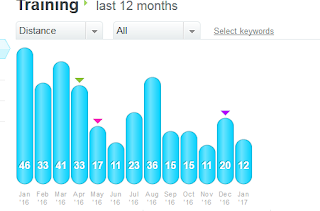 I'll keep using DailyMile as long as it is free and available but I suspect it will be sunset in the next few years.  There are other apps I could use and will likely do so since my Garmen is about to die.

UPDATE:  Not too long after I published this, I logged into DailyMile to post that day's run and saw this message 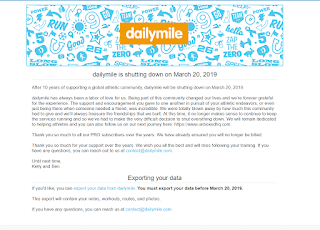 Thank you for reading and I hope you will comment below. Here's the part where I beg for stuff because we get paid in likes, shares, re-tweets and feedback. If you like my posts, funnies and random facts, please also do any and all of the following:
Follow Mysteries of Life on Twitter (@MysteriesOLife), Facebook or subscribe via email.
Posted by Icarus at 3:13 PM