So decided to tackle another home project last week.  I decided to stain the board underneath the front door to my condo.  I wasn't sure what the technical term for this board was so I googled it and found it is called a Threshold or Saddle. 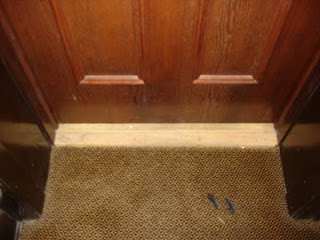 For some reason, the Thresholds on our doors do not match the dark woodwork of our doors and stairs.  I'm guessing they were retro fitted and no one ever bothered to stain them correctly.  There were four almost-impossible to remove screws and  I thought it would simply be a matter of removing those screws, taking the sill to my workshop (aka my mother's basement) to sanding and stain.  Not so fast.

The screws just held down this one thin strip of wood which is part form, part function.  The Threshold itself was held down by more screws which were sealed with some type of wax.  I didn't want to break these so I decided to sand the Saddle in place.  I cheated and used a belt sander (read: overkill) to do the majority of the board and then used some sand paper by hand to do the parts the belt couldn't reach. 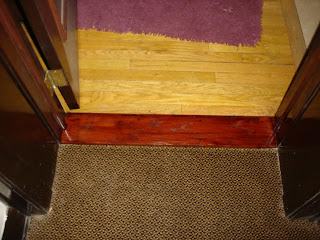 Here it is after one coat.  I didn't realize that the stain would take 6 hours to dry enough to add a second coat and that I would also need to use steel wool beforehand.  The steel wool apparently is to break the polyurethane so that another coat can be applied.  So another trip to the hardware store.  While there, I decided to replace the screws I had removed with better ones, since I had basically stripped the previous ones -- I could have used them one more time, but if  I ever needed to remove this piece again, it would have been a hassle. 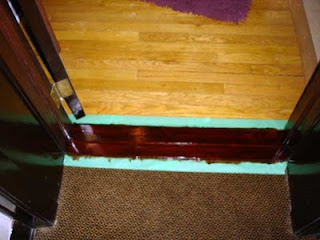 After rubbing the Threshold with the fine steel wool, I put that thin strip of wood back on and then applied a second coat.  While it takes 6 hours to dry, you can usually remove the painters tape after about 30 minutes.  The finished product: 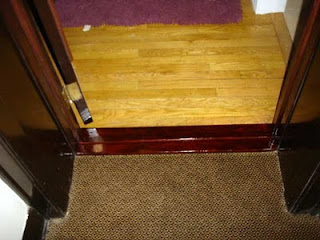