My first encounter with a Karen

My first summer home from college I got the only job an experienced no-talent, not connected 19 yr old could get: telephone soliciting (don't judge).
Sometimes my mom would sometimes pick me up after work.  She had a dark blue Cutless Ciera.  One time, I went to the parking lot and saw a dark blue Cutless Ciera and got into the passenger seat.  It was not my mom.  it was another mid-30s white woman. 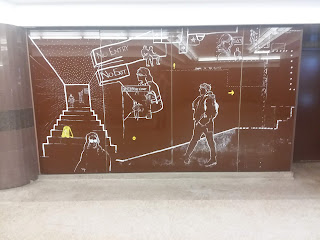 As soon as I realized the error, I said "whoops, wrong car."  But Ms. Karen wasn't hearing any of it.  She was screaming panicking and not calming down.  Understandable from a certain point of view.
ninety seconds later Karen's kids showed up.  They vouched for me that we all worked together and we had a big laugh.  It became a running joke back at work for the remaining two weeks that Lenny and Squggy still worked there.
Heres' the thing:  Karen went from OMG YOU COULD ONLY BE TRYING TO ROB/RAPE/KILL ME -- NO OTHER EXPLANATION is PLAUSIBLE to "oh it's an honest mistake want to join us for movie night in 20 milliseconds."
the lady with the unleashed dog reminds me of my coworkers' mother.
I should add that Lenny and Squggy quit that job a couple of weeks later on principle.  Our employer, Roger, had this incentive program.  We were paid for 35 hours at $4/ hr which comes to $144 per week.  The details escape me but essentially we got an additional $1/hr and an extra 5 hours of pay if we didn't come in late, come back from lunch late and I think didn't need to leave early.  So an extra $56 in 1988 dollars isn't anything to sneeze at.
Still, Roger was being an asshole and probably circumventing some labor law but Lenny and Squggy were probably trying to get out of working all summer so they could instead enjoy the benefits of whatever suburban home they lived in.
****************
Thank you for reading and I hope you will comment below. Do me a favor? Click my "like" button and join our Facebook community.
You'll find funny, informative links and interesting pictures.  Don't worry, your Facebook feed won't get overwhelmed.
Happy Reading!  Follow Mysteries of Life on Twitter (@MysteriesOLife), Facebook or subscribe via email.
Posted by Icarus at 3:09 PM