A touch of Spring

Over the years we have had some makeshift furniture.  We started out with a patio set I got on clearance from Bed, Bath and Beyond when we still lived in the condo.  I was proud that I had waited until just before July 4th to nab these because they were discounted by $100 and with the 20% coupon, it was such a deal. 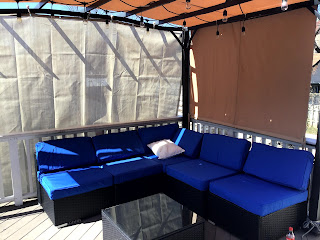 After those bit the dust, we made do with various chairs and lounges and whatnot.  Mostly because every summer might have been our last here.  And it wasn't always the best outdoor space.  But since getting the railings fixed and finding a more permanent pergola solution, our outdoor space is cozier than ever.  Also, now that our kids are older and play with the girls down the street almost every day, that deck is gonna get a lot of use. 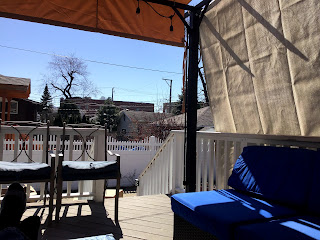 Last year, I watched for sales on patio furniture.  I missed the window and everything decent was sold out.  This year I decided to act sooner.  I thought it would be a hard sell to Nightingale since I'm still unemployed and we don't know how much longer we will truly live here.  But then we realized that we are gonna use that space every nice day possible from Spring until late fall and even beyond.  And while it will not increase the value of the house, it will stage the home nicely to show that there is a cool deck that everyone can enjoy. 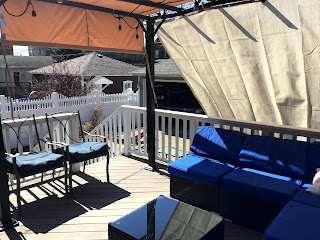 I showed Nightingale a few links and she picked one before I could refill my coffee.  It arrived last week and it took the better part of an afternoon to put together.  It isn't high end but it isn't cheap stuff either.  I'd say it's just below the middle of that spectrum.  We should get at least two seasons out of it, but I'm counting on more.

I also bought a sunblock shield from Walmart and replaced the canopy that came with the Aldi's pergola.  I didn't take them out of their packaging until Saturday but was pleasantly surprised to see that they match.  I still need to figure out a good way to tie everything down for windy days so that nothing gets destroyed.  And we probably should get an outdoor rug just to make it look pretty and keep little feet from getting burned on the composite deck.