People mean well, but they often execute poorly: So I posted on FB the other day "Any ideas/recommendations for banquet halls or restaurants for a reception in or near the city?" 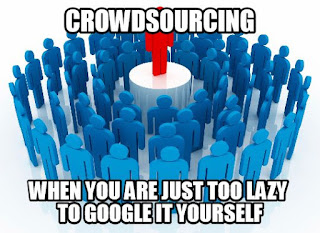 Let's just say I got the results I expected. Not expected as in several recommendations for places in or near the city -- I did get some of those -- but expected as in people stretching the definition of near the city and listing places that are not banquet halls, restaurants or even venues that could hold a reception if you tried.

Someone PM'd me, saying something along the lines of "if you have a favorite restaurant, you should ask them if they could do it."

Thanks Lieutenant Logic, because when I asked for restro recommendations, it never occurred to me to consider one of our favorite places.  Another person suggested two places but didn't know the names, only a vague location. I'll get right on that one.

I use to get more irritated when friends would do that but I've learned that it's not only the nature of Facebook but it's also the nature of people.  Most really do want to help but they just have a different view of what that help should be.
Posted by Icarus at 6:58 PM