My mile splits weren't pretty, but they were under 8mm: Ran a faster time (1:18:31) than last month's LF10 (1:24:27) and also much improved over last year's SF10 (1:23). Also made my goal of being under 200 lbs for the race. Not sure how much lower I can feasibly achieve with cookout season starting and I'm not willing to give up my adult beverages.

﻿﻿
﻿
﻿ ﻿﻿ The race itself was quite good. My friend THS caught up to me around the 1.5 mile point and ran with me until the turn around. At which point he surged ahead by about a tenth of a mile. He remained in sight until we had about 3 miles to go and then somehow I managed to shorten the distance between us by half. I think it was when he tried to go around some runners and went to the outside and I was on the inside (picture a track though this was just part of the lakefront path that curves). eventually I caught up to him and he faded back. Somehow I stayed in front and finished a few seconds before him (timewise) though I didn't see him until a minute or two after I crossed the finish line.

When THS caught up to me at 1.5 miles, he said that he misjudged the start time and got to the race as the gun was going off. This is a common theme with THS. At first I thought he was gonna run with me for a bit and then take off, but he said he wasn't in top shape. This was a ruse of course but a good one because it seems his goal was to keep me running at my top pace. If I wasn't running with him, I probably would have slowed down a wee bit. We managed to keep under 8 mm for many of the miles. In fact I think there were only two miles that lapped at 8 minutes and I unintentionally banked time for the rest of the race.


In other ways it was vastly different. For one thing, we had guest staying with us. DrDrea and her husband were in from Houston and Jema came up from St Louis. We have our old queen bed in the guest bedroom which the couple got and we made Jema pay the Single Person Tax by sleeping on the air mattress in the office. 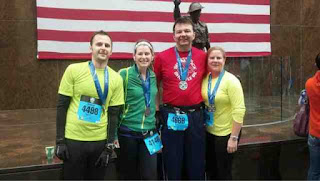 In my head I thought we'd have a nice pre-race "slumber party" at our place. I'd grill some chow, we'd drink on our deck or in the basement, enjoying the bar. Then we'd go to sleep get up early for the race, hang out there and then come home, shower nap and repeat.

Unfortunately, life got in the way especially since I didn't make much effort to co-ordinate or plan things. I didn't want to be the planner.

First, our basement flooded on Wednesday. I'll cover it in a separate post, right now I'll just say that there wasn't much in the way of damage but it was still an expensive cleanup. Our basement was unusable for three days because of these hugh fans and humidifyers that had to run in order to dry out the dry wall.

Second, Jema had her own agenda. She understandably wanted to get in as much visiting as she could. and she really wanted to go to her old haunt, the Daily Bar and Grill and hang out with Magenta, who didn't run this year. Since the weather was sucky and we couldn't utilize the basement anyway, it kinda made sense to go there for dinner. 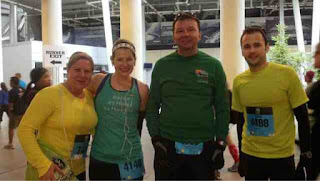 Third, my cousin Wednesday had a birthday party for her 1 year old on saturday and she lives in BF-Iowa. It's over an hour drive in the best traffic. When I called to RSVP I meant to say we'd be a maybe but I ended up saying we would come just late. I should have realized that we could have come much later and I could have got my nap in.

Maybe next year will be better organized.  Or maybe we'll all be at another stage of our lives and won't be able to hang out together, perhaps only sneaking in an appearance at the SF10 like Na did on a secret visit to Chicago for her Birthday.
Posted by Icarus at 9:10 PM