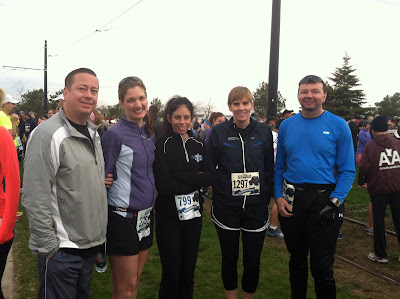 On Saturday I ran the Kenosha Half Marathon along with some runner friends.  Our group has done this race at least twice before.  That makes sense because it's a short enough drive that you can either stay local and get up early or you could pay the extra dough to get a hotel room as we did this year.

Last year I ran it under someone else's bib and was just trying to finish the race with minimal walking.  IIRC I forgot to bring gels so it is no wonder I kinda faded at the end.

The first time I ran this race in 2009, I had had a tumultuous April and had struggled with my running all winter training.  I was signed up for the full marathon but exercised the option to switch to the half because I knew it wasn't going to be pretty.  I really just wanted to finish that race and take a break.  I was also registered for SF10 but a business trip to Hong Kong made me miss it, which was probably a blessing in disguise.  So it was pretty much my last race of the year, except for the Bastille Day 5K which was technically my second date with Nightingale.

This year, I managed to run with something that has been missing for a long time.  I won't use the word effortlessly -- because there is no such thing when it comes to racing -- so instead I'll say Struggle-free.  I started out further back than usual, around the 10 mm group and just took the first mile easy.  After the first mile I managed to get a running lane and increased my speed just slightly.  I ran the race in 1:48, or 8:14 pace.

B had a good run too.  She posted a sub 5 hour marathon and it's been a long time since she's done that.  In Detroit the wheels had come off again so I think she was over due for a good one.

The trip was supposed to be a lazy get-away.  However, because we had to spend 3 hours moving furniture my former tenant left behind and cleaning the condo, we didn't arrive until after 9 on Friday, missing our chance to explore the outlet malls.  So even though she was willing to come out and support us on the race course, I told Nightingale to sleep in and enjoy the Outlet Malls as soon as they opened.

As part of my hair brained scheme, we were going to go to West Chicago for a wedding shower in spite of my long standing policy of  not attending showers or kiddy bday parties.  Fortunately it was a very casual shower and I had already set the expectation that we would arrive late.  In fact, we got there just before they removed the buffet so we were able to get some much needed grub as I hadn't eaten much before because of my wisdom tooth extractions.  So all in all it was a busy yet fulfilling weekend.