A few Sundays ago, I managed to get into a convention for free.   My friend DrDrea is in town for the ALA conference and when I learned that one of my favorite contemporary authors was going to be there for an unannounced appearance, I asked if she could get me in.

DrDrea did not disappoint.   She got me a buddy pass which got me into the convention for free.   Had I realized what a big event this was, I would probably have gone to check it out anyway even if John Scalzi wasn't gonna be there.


What I didn't realize was that Tor was giving away copies of his latest book, The Human Division, which now that I've gone back and re-read some of Scalzi's posts about it, I realize the title is a play on words.

I had tweeted Scalzi earlier in the week, asking if there would be copies of his book to purchase and if he would sign them.  He tweeted back that he would sign books.  I thought the response was short because he probably gets hundreds of tweets per hour and I was lucky enough to get his attention at all.

You had to sign up for certain events and according to the ALA website, 92 people had "expressed interest" in the Scalzi event when I signed up.  My bet was that there were more than that once all was said and done.  Yet somehow Scalzi managed to engage everyone who stood in line waiting for him to sign their book.

While I probably could have lost myself at the convention for hours, my aversion to crowds and a 4 o'clock appointment back home won out and I decided to head home.  Outside McCormick Place, the CTA bus tracker reported that the next bus wouldn't arrive for 30 minutes.  As luck would have it, there was someone offering free trials of those new Divvy Bikes that are springing up all over downtown.

I figured it would be a good way to get me to the part of town Nightingale was in.  She was at the Home Depot in the west end of the South Loop and I was a bit closer to Chinatown.  I could have had Nightingale come pick me up but she had already graciously dropped me off just more than an hour before so it seemed cruel to ask her to make a second trip.

So after listening to the finer points of the program from the individual, I got my free code and procured a bicycle.  These bikes only have three gears Slow, Really Slow and You're Not in a Hurry Are You?  While I fancy that I could make it from my house in Portage Park to the South Loop in 30-45 minutes, it would take much longer to make that journey on one of these bikes.  Which is sort of the point.  These are merely Self Propelled Urban Runabouts that are meant for short trips like the one I took.  Alas, I don't fathom these will pop up in the lower income neighborhoods even though there is really no street value for them.

Back to the story.  I dropped off the bike at the station at Roosevelt and Wabash and looked around for Nightingale.  I didn't see her because she was driving my car and I was looking for hers.  Yes brain fart as you'd think I'd remember that.  After a good laugh about it, we picked up our friend and headed to Yuppie A&G Stanleys to get some produce and then head home for a cookout.  Our friend has been teasing us with free wine for several weeks yet she always managed to forget to bring it.  No big deal, I just went to the nearby Jewel and picked up some beer, along with whatever the scantly clad Latina Marketing Major was hawking -- a special kinda of margarita if I'm not mistaken. 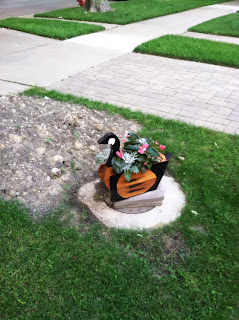 While at the store I get a call from the 4pm appointment.  It was the FEMA inspector and he wanted to know if he could come an hour early.  I said that would be wonderful as the only thing better than having to wait around less time for someone is having a Corporate America Meeting canceled altogether.

I must admit I've had to reset my preconceived expectation of government workers.  I expected him to check the basement, look at our dirt pile in the front of the house and then tell us we'll hear something before the next coming of The Lord or a Cubs World Series, whichever doesn't happen first.

Captain John was polite, of course, but he was also very thorough. He didn't just look at the basement but started in the attic and worked his way down.  Naturally there wasn't much to find on the first or second floor but he still included it in is inspection.  He was friendly and non-threatening and my only real criticism would be that he didn't really answer questions so much as he said a lot of words that didn't amount to much.  So he is government after all.

Like I said, I wasn't expecting speed but lo and behold, the next day our case file had been updated and the day after that money was deposited into my bank account.  Less than 25% of the total cost of the cleanup repair but still nothing to sneeze at from the perspective of someone whose insurance did not cover this type of disaster in the first place.
Posted by Icarus at 11:54 AM