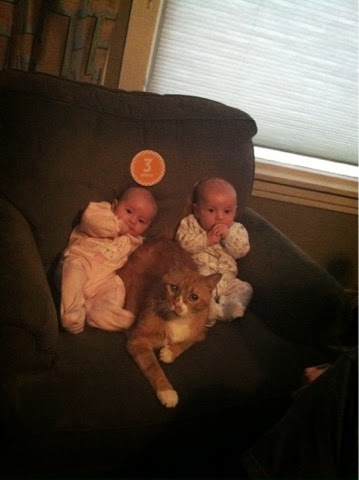 We have switched from weeks to months so that every 22nd of a month marks a month milestone instead of counting in increments of 4 weeks, though I still like to think of every Monday as one more week closer to them being able to shovel the snow for me.

Even before having children was on the horizon, I promised myself I would never be one of those parents who, when you ask them how old their infant was, responded with an über precise down to the month/week answer.  When the time comes, a simple 6 months or year and a half, respectively, will do.  Indeed, I've had some mothers answer the question with: 8 months 2 weeks, 3 days and 4 hours.  Okay that's a slight embellishment, but not by much.

It is rough being parents of twins.  When it is just Nightingale and me, the default is one kid per adult.  You have to do man-to-man, zone just won't do.  And babies want to be held.  You cannot just put them in a bouncy chair or their crib and let them hang out. They might agree to do that once time a day for 20 minutes.  Then they want to be held.  And sometimes holding them isn't enough.  They want to be held while you are standing up or walking because you sitting just won't do.  It's like they have some GPS that tells them they are at the wrong altitude or something.

The other day, I didn't locate Natasha's pacifier quickly enough -- in fact I could not find the damn thing without turning on the lights and locating it inside her sleeper -- and she woke up for the day.  Nightingale assures me she would probably have gotten up anyway and we only would have scored another 20 minutes of sleep anyway but since I had been more or less up since the middle of the night feeding, those 20 minutes sounded wonderful.

There are only so many things you can do with one hand and of those, the subset you can do well is even smaller.  Ergo it's hard to get posts together here and over at ChicagoNow.

Before anyone launches any cliches at me, yes they are wonderful bundles of joy.  Yes it is/will all be worth it.  yes God's creation and unicorns farting rainbows. yadda yadda yadda.

But I'm not a cliche kinda person and the reality is I'm dealing with the dark side of raising babies right now.  The 3am feedings and the diapers and the reflux.  Oh and the cost.  Diapers, formula and child care are expensive in this country, especially in Chicago.  Daycare for infants is high because it requires so much personal attention (see always wanting to be held) and because they can charge whatever they want.

Babies don't know how to tell you what is wrong with them.  You check the obvious things like their diapers, if they are hungry or try to put them down for a nap.  But if all that fails, it's hard to tell if something is wrong with the little germy barfy poopsack or if they are just being difficult.

I unfortunately miscarried in November.  When I found out I was pregnant, I was terrified and felt like I wasn’t ready.  I look back on that with regret and wish I had appreciated it.  I hope that none of you ever have to go through a miscarriage because the emotional roller coaster it puts you through…I’m still suffering from it.  I’m a lot better, really I am, but November and most of December was full of crying, anger, guilt, and fear.  I’m still scared and unsure if I want to try again because of the constant fear I know I will feel if I do get pregnant.  --  The Highs, The Lows, and The Books I Read In Between (2014)


and I think well sleep is over rated anyway.  I certainly don't want to sound like I'm complaining, I just need a little venting.  One of the ways I use to relieve stress was to go for a run.  That has been taken away from me of course because my knees are achy and because I haven't been running as much my endurance has gone away.  And so I blog.