That must be some discount

my neighbor is getting new siding.  He's using the same shit-for-brains assclown who I hired to repair my porch stairs posts.  I hired him because he had dome some carpentry work for Sam and seemed to do a decent job.  He must be some relative or something because he said he gave them a discount on the work and is working on and off, presumable between other paying jobs. 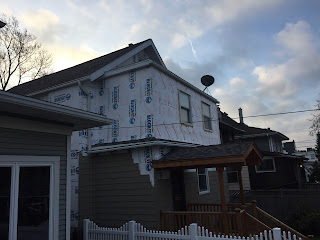 They started the work on Sept 29th.  It is now Nov 17th.  Call me spoiled but it would have to be a significant discount for me to go this long without the work being completed.

I don't like the guy because he never came back to finish the job, nothing major but he was supposed to put a cap on the top which would have looked nice and might have kept the wood from splitting.  He used cheap, untreated wood.  He convinced me that because he was painting it, it would be fine.
Wrong.   Because you don't paint the underside, moisture gets in and damages your wood.  Worse than that, he started ignoring my calls and when I called from a landline, he actually pretended his wasn't the right person.

Do me a favor? Click my "like" button and join our Facebook community.
****************
Thank you for reading and I hope you will comment below. Here's the part where I beg for stuff because we get paid in likes, shares, re-tweets and feedback. If you like my posts, funnies and random facts, please also do any and all of the following:
Follow Mysteries of Life on Twitter (@MysteriesOLife), Facebook or subscribe via email.
Posted by Icarus at 8:37 AM