I've been working Project Ancient Letters since September of last year.   These letters have lived in a box that I've carried around from apartment to apartment, condo to house.  These old letters bring back memories long forgotten.

Some people can look at that box and just say yeah I don't need these anymore and toss them without reading them. 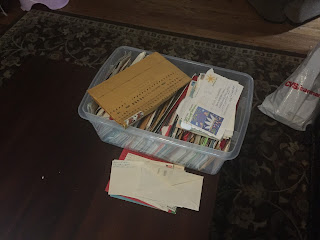 Some people will re-read them but still throw them away.

Then there's me. My original plan with these letters was to re-read them and then pitch them.   But someone suggested that I scan them which seemed ridiculous at the time.  But then I realized that I have free access to an industrial sized scanner at the office and had no set timetable so why not.  I'm certainly becoming very good at working that scanner.  If my current job doesn't work out, I guess I can find work at a Kinkos.

These letters were very much like Pensieves (or Horocruxes in some cases), transporting me back in time.

I just scanned the last ones before the end of last year, so now comes the next phase.  Returning them to the senders that I'm still in touch with.   I'll keep a few that have some special meaning for me, at least until the next time I need to clear some clutter, and the rest get bonfired.

It's interesting how people will reference something I obviously wrote in a previous letter, or perhaps mentioned on the phone, but it is just vague enough that I cannot tell what we are talking about.  I can see traces of when my confidence started to erode and my depression setting in.

If I had the bandwidth, I'd write a post about some of the key writers.  Maybe I still will even though I've already returned some of the letters to their senders.