Fastest to 300 miles in a while 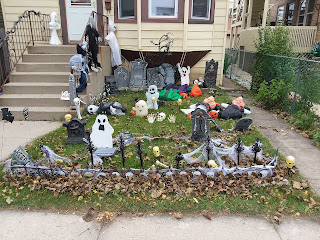 On Monday I reached 300 miles for 2019.  In the past, it was usually the month of December, often the very last week when I hit that milestone.  Having run 40+ miles this month -- something I have not done in a very long time -- I not only completed the mileage for October but eliminated the mileage deficit as well.

Okay technically I have a mile to go but what are the odds I won't get a great Halloween day run in?  And even if  I don't, just add it to November.  32 miles to go!


What I've found is that there really is something to doing at least a 2 mile run.  If I'm not feeling it, quitting after 2 miles still knocks out that day and the next for recovery or the previous for makeup.  If I am feeling it, it isn't that hard to push through another mile or two and build up some running equity.

In the summer I often either made the mistake of or didn't have the opportunity to, run too late in the day. The summer sun would be out and I would get gassed.  Now that the weather is cooler, I strive to go a little later in the day to get the highest temperature.  I still should endeavor to run as early as possible since that leaves me with more of my day left to do mini-projects in between work activity.