A Tale of Two Armstrongs

Last week we lost two heroes named Armstrong. One through death, and the other through a fall from grace.

With apologies to Charles Dickens:


One was the best of a generation, one was his own worst enemy,
One advanced the Age of Wisdom, one apparently succumbed to foolishness,
One was the epoch of belief, one will unfortunately become the epoch of incredulity,
One invited the season of Light, one will now live seasons of Darkness,
One brought the spring of hope, one bears the winter of despair.

Both Armstrongs were heroes and had their moments in the historical spotlight. Neil avoided it, Lance exploited it.

I was barely two months old when Neil Armstrong walked on the Moon. So I cannot accurately speak of what it was like to be there when it happened. Ironically, we didn’t have social media, yet achieved something fantastic with technology and budget probably significantly infantile when compared to the infrastructure of YouTube, Twitter and Facebook.

News sources agree that Neil was truly reticent. He downplayed his role in history, and didn’t reach for supersized share of the glory pie. I’m guessing he wasn’t part of the one percent, though I doubt anyone would begrudge him if he were. He was content to retire in a suburb in Ohio and teach at University of Cincinnati. Very modest for someone who went where no man has gone before.

Lance Armstrong is the polar opposite of Neil. An opportunist, he leveraged his battle with Cancer and his passion for cycling to raise millions of dollars for cancer research. His other claim to fame was leaving his wife for Cheryl Crow. We may never know the intimate details as Kristin has been nothing but classy about it on her blog.

And while I thought he was such a pompous ass when he attempted to run his first marathon that I not so secretly wished he would break a leg, I too cheered when he broke the record for Tour de France titles. After all, it gave French people yet another reason to hate Americans. 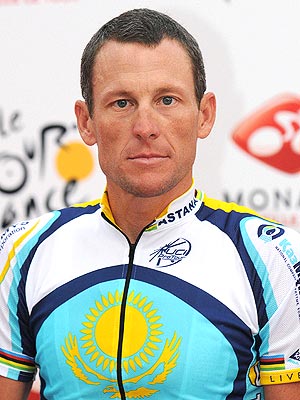 I don’t know if Lance cheated and neither does the average Joe. Only Lance and his maker know for certain. According to my quick Google-fu, Lance never failed any tests and there hasn’t been an official trial. There have just been a group of people who testified that they saw him doping. Either the guy found a new way to dope that eludes testing, or … Occam's razor might apply here.

Neil held to that standard by staying out of the limelight and true to his beliefs that “The space program was one with many, many moving parts, and he was only one of them.” He worked within the system to find the balance between giving the public what they wanted and maintaining his privacy.

Lance attempted to outpace that standard and was seduced by opportunity. He bucked against the system time and time again and when the music stopped, he had more people who wanted to see him fall than rise.