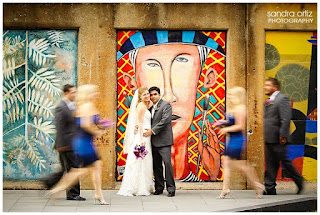 The weekend was tied up with DrDrea's wedding activities so we didn't really accomplish too much outside of watching two more people marry the person they love in a country where not everyone is free to do so.

Friday's rehearsal dinner was an adventure that we tried to avoid yet couldn't. Before we left for work that morning, Nightingale was trying to figure out if she should drive or take the El and then the Metra out to La Grange. I asked, with uncanny foreshadowing accuracy: "which do you want to deal with traffic or getting on the wrong train?"

We decided to save the planet for our grandchildren and only take one car to La Grange. Of course Nightingale got on the wrong train, an express to Naperville no less. This definitely supports the argument not to move to the suburbs.


The reason people get on the wrong train at Union Station is because it's designed for people who take the train every day. If you know that 5:43 train leaves from Gate 8 every day, with maybe one exception every 300 days, you don't need a very complicated system.  If you only use the Metra once in a blue moon, you need a big f-ing sign  that says This Is Not the Droid Train You are Looking For.


Even getting to church was a little more stressful than it had to be because of traffic and leaving 10th hour. Because I was doing a reading, skipping the ceremony was not an option. Once my reading was over I could relax and enjoy the ceremony. As it went on, I noticed that the windows were getting darker. I suspected we were going to get some rain -- there go the wedding pictures!

What started out as a hot, hot 90+ degree day became a short term flash flood followed by a cool 70 degree sunny afternoon.   DrDrea kept her cool but she had this look on her face like oh no, what else can go wrong.  She already had tuxedo snafus and bridesmaids todos. 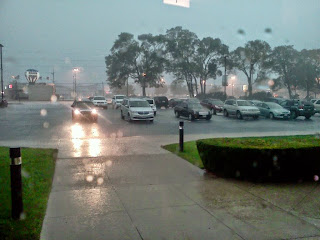 The rain did not last very long, in fact by the time we completed the short drive to the reception, it was sunny again.  The hotel was very elegant and it would have been interesting to see what the rooms looked like.  Unfortunately, we didn't secure a room in time.  They released the block of rooms a month early -- not standard wedding procedure -- because of Lalapolloza.

The next closest hotel down the street required a minimum of two nights stay on the weekend and the rooms cost just slightly less than a iPad.  We decided to curb our drinking and drive home.

Weddings should really be about the two people who are getting married.  And Wedding Receptions should be about the couples having a good time and the single people hooking up.  Unfortunately, it is never that easy.  I only had one single eligible guy friend to invite to my wedding and a table full of single ladies were fighting over him.  Naturally he hooked up with the fun, easy going, exotic indian chick.

At DrDrea's there were a few more single people to go around but I think the challenge was they already knew and weeded each other out.  I think the perfect wedding hookup requires a carefully measured dose of We'll Never See Each Other Again Unless We Want To.  It a hard combination to achieve.
Posted by Icarus at 2:26 PM