Getting Older and Getting Better Apparently

Five Things you don't Tolerate as you get Older:  Yes it's a Chicago-centric edition though I'm sure much of it is applicable in other places.  I could break these each into their own post and perhaps some day I will, but I believe the point is self-evident.
This isn't meant to be an absolute.  Once in a while, I might still be willing to deal with a crowded fest to see my favorite band, or put up with drunken sorority has-beens and navigate Wrigleyville.  And being the loyal fuck that I am, I will put up with some friend's drama as long as I can count on them to put up with my BS. 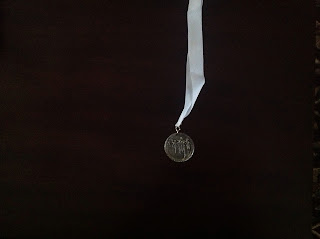 Whatever happened, I didnt' have the time to investigate, mostly because I really didn't care.  While this race might one day grow to be a big as the Shamrock Shuffle, right now it's just a piddy little fun run like most sunday races are supposed to be.
Well it turns out the guy who finished first in our age group also second overall.  Apparently when you do that you don't need to bother with getting the award for age group because you get something for coming in second.  It's actually a brilliant stragedy because there's something for everyone.
So by default I got a medal for first place in our age group.  As far as I can recall and Athlinks can verify, I've never placed in a race before.  I do have a recollection of coming in first or second at an inaugural 5K the summer i "trained" for my first martahon in 1998.  As it was an inaugural event and the proceeds were going for some flavor of cancer research, there wasn't much in the way of fanfare. 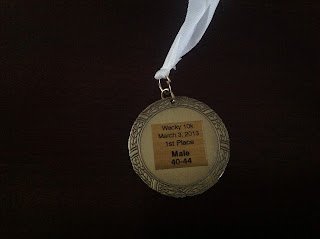 Looking at the difference between my chip time and my race time (45:00 vs  51:46) i do find it hard to believe there was a difference of almost 7 minutes.  I did take my time lining up but not that much.  Still Old Fart #3 has the same time differentials so I doubt I'm taking a medal away from anyone.

While we're on the subject of running, if you are a runner, there are two sites you should definitely have in your back pocket.  Athlinks, which admittedly is all about revenue and very light on the customer satisfication.  but it is a good place to find and gather all your race results.  The second is DailyMile, which is good for logging your mileage.
You don't have to connect with anyone on these sites if you don't want to, but being a runner you probably possess a good dollop of ego, with a  fairly large side of narcissism.
Posted by Icarus at 3:55 PM