Saturday was one of those days that I thought I'd run home and blog about one thing then ended up blogging about another.  Sometimes I get so caught up in my issues I forget that other people are just as, if not, more screwed up.

﻿
The day started out normal enough.  I met up with SHB for my first Saturday run of 2013.  That's right, I've gone three months without running on a Saturday.   In my runner religion, Saturday Long Runs are our day of holy obligation; our mass.   Yet I almost purposely have avoided running on them this year.   On the surface it's because other things had come up most weekends.   Deep down inside, it was a payback for all the Saturdays I've given up for running and all the future Saturdays to come.

Joining us was B's husband ClarK.  I was trying to learn more about their house hunting situation but SHB kept chiming in about her mortgage.   SHB relates to people by finding a common story and then telling hers.   And that would be fine, IF she would wait her Fing turn and let others finish their story first.   She forgets or ignores the fact that as we both run with her we've heard her story 638 times.

﻿
In the afternoon I went to a gathering to celebrate a friend getting married.  Technically a bachelor party, all that was involved was going to Hawthorn Racetrack and watching the races while enjoying a yummiest brunch and having some drinks.

I haven't been to a traditional bachelor party in years and I'm fine if I never do again.  Not because I feel that nudy bars exploit women or lead to bad decisions (they do) but because I was never into that crap when I was young and I'm too old to care about it now. 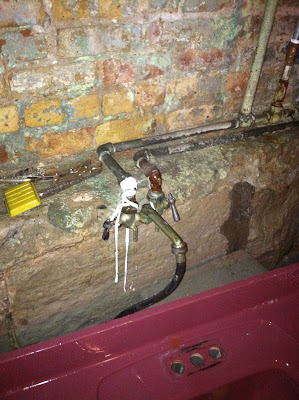 On the way home I decided to stop by my mothers house on a covert mission.  She was with nightingale shopping so I would use the opportunity to pick up some of my stored items without having to, how shall I say it, deal with her.   Lucky thing that I did because one of her pipes sprung a leak in the basement.
Posted by Icarus at 11:58 PM