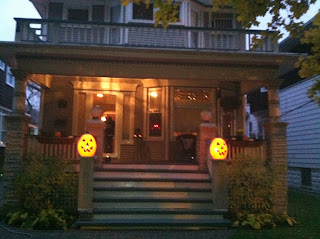 Since the Bears don't play until tonight -- and in fact haven't played in a couple of weeks because of their bye -- this Sunday and last Sunday were excellent yard work days.  We put away our deck furniture, and laid down some mulch.  I know it's not the end, I'll still probably have to check the gutters and do some other little things before the weather gets too difficult to work outside.

We got our water barrel from the water company a few weeks ago but it doesn't make any sense to put it in right now.  So I'll probably wait until Spring to put it up.  though I did install a hose rack that was more difficult than it should have been.  I also managed to get the garage better organized so this winter I hope to start on some simple woodworking projects.

In spite of the weather, we got a couple dozen trick-or-treaters.  We probably got more in one evening than I ever did in the decade I lived at the condo.  B brought over her kid, her husband and her pseudo-nanny Hannah.  Hannah is a bit of a drama princess in that she doesn't own a car, cannot afford the $25 taxi ride to our house and refuses to take the El.  Therefore, she kinda forced B to wait until she got off work to give her a lift, thus forcing B to endure traffic that she could have avoided by coming a little earlier.


She actually asked Nightingale to pick her up, not realizing, understanding or considering someone else besides herself caring that traffic from Streetville to South Loop is intense at rush hour and would take longer than if she just sucked it up and got on the El.  I get that the El can be scary late at night.  But during rush hour it's not a big deal.

We think next year we might open it up to any parents who have kids but live in a building instead of a home and cannot easily Trick-O-Treat.  This will of course morph into a Halloween Party though.

Over the weekend, we did a double visit to the Loop, West and South.  First we had brunch with Na who was in town for the Hot Chocolate run.  Then we went home to finish a few things up and then went to the South Loop to watch the Michigan v Michigan state game at B's.  The B and Na cold war is still on in that Na is past the point of caring and it isn't in B's programming to make the requisite move to bring about reconciliation.