The long awaited Tale of our Flood

It was the Wednesday morning before Memorial Day weekend and Nightingale went down to the laundry room to toss her dress in the dryer to remove some wrinkles.  She noticed a large pool of water around the drain.  We usually get a little rain that seeps in through our Wizard of Oz doors and it goes straight to the drain, but this was more than usual.  We assumed the drain was somehow backed up.  I tried unclogging it with the wet dry vac but all that did was fill up the vac with water and more gushed in.  This should have told me something but we were in a rush. 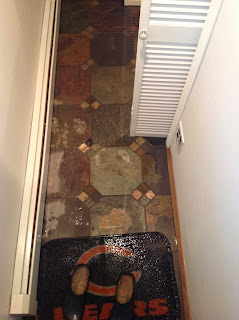 On this particular day we had to be downtown for an appointment we couldn't afford to miss or reschedule.  On top of that I had some meetings at the office that I had to attend in person.  This combination along with the water not being so much made us decide to deal with the water when we got home.  Bad mistake. 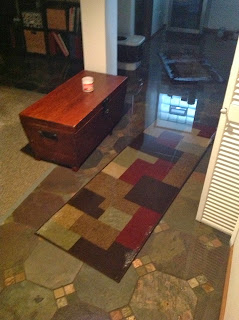 When I got home the water had quadrupled and was beyond the laundry room and into the family room portion of the basement.  I just did get home in time to move all the furniture to one end of the room to save the new sofa, loveseat and ottoman I had just bought two months before. 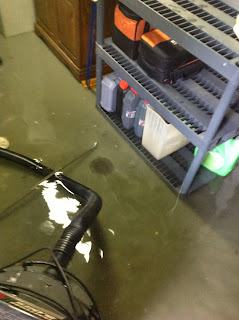 One of the problems with this type of situation is that you don't really have time to Google and shop around.  We called our Home Warranty Insurance company and they were less than helpful.  They said it probably wasn't covered but would gladly send out one of their vendors to take a look.  We also called State Farm, our home insurance company and they also said it wasn't covered but would gladly send out an investigator at some point.  I'm not really sure what she said because she was rambling.So we called a service that advertised that it handled this sort of thing.  Only they just do the cleanup,they don't fix the problem.  Their website didn't make that clear but we figured it out in time to call Pete's Plumbing service.

The long and short is that our sump pump was in a locked position, burnt out.  It needed to be replaced.  My theory is that it was overworked from all the rain we got in April so that it simple said screw it, i give up.  We also had a crack in our drain pipe from our sewer to the city sewer and because it was on our property line, Pete said we had to fix it, not the city.  He said that even if it extends to the city part the city would only fix their part. 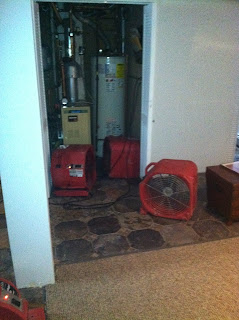 The bottom line is that I got hit with a $6500 bill to fix this at a time when my credit card had a bigger balance than I prefer to carry because of some other life events.  (Furniture and Financial Planning fees).  So it took some juggling to get everything aligned and I am still paying that bill.
Posted by Icarus at 6:53 PM