This is the last day of 2013 and it is freezing cold in Chicago.  Perhaps Hell itself froze over, not realizing that the Bears did not make the post season, instead squandering an 8 pt lead over the Green Bay Packers with less than 2 minutes to go. 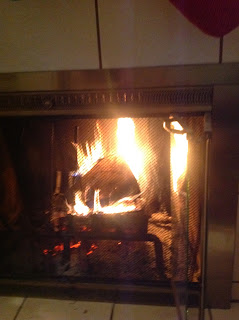 Chicago sports team disappointments aside, what can I say about 2013?  It was a year of change and transition and some growing pains.  We bought the new house and had to deal with all that comes with owning a SFH while also dealing with the dilemma of being reluctant landlords times two.  I don't think I wrote too much about those issues and I don't want to re-live them here.  First my tenant turned out to be source of stress and aggravation and then, or should I say simultaneously, Nightingale's tenant also became a problem. So suffice it to say that we confirmed that we do not want to be landlords for the long haul and my thought about keeping Nightingale's property as our "in town" for retirement.

This house too had its share of issues.  First off, we didn't have heat in our basement.  This was a minor problem resolved for $200 but that's $200 I should not have had to spend.  This problem didn't crop up during the inspection.  Then of course was the flood which caused financial hardship I'm still recovering from.  There's never a good time to have to pay $6K for a new sump pump and installation but it especially sucks after spending $1400 on furniture, $500 on a headboard and $1K for Financial Planning all on the same credit card.

I'm not wired to take all that out of my savings so I have been slowing paying off a zero interest credit card.  Even with my year-end bonus a small grant from FEMA, I'm still $5K away from paying it off.  So that means no big screen TV for the foreseeable future.  What I really need to do and am about to do is go on major lock down and not buy anything I don't absolutely need.   That's not to say I was frivolous all summer, I was anything but.  However, I didn't hesitate to buy things like the new desktop that could have waited a few months when I saw a good sale.

On the job front there were challenges.  For one thing I had to deal with a PM who didn't want to manage the project at a PM level.  He was terrible at doing the basics of project management like communicating tasks, deliverables and expectations.  Of course I made the mistake of calling him out on it directly instead of letting the Natural Order of Corporate America take care of it.  He's gone and the project is over, but I'm now on my boss's boss's radar as a potential bad apple.  It doesn't help that I don't have a lot of work to do once my application is updated and stable.  We are trying to convert me to a BA or PM but that is a long process.

On a more positive note, I think I wrote some very good posts here in the early part of 2013 before succumbing to simply posting a picture and a few sentences.  I do more of my substantive writing at ChicagoNow and that's not a bad thing.  For the foreseeable future, I will continue to manage two blogs, with this one being the personal stuff and CN being the "hey world, look at me" blog.
Posted by Icarus at 5:00 PM