The Not so fun part about being a Reluctant Landlord

>My wife and I are what's known as Reluctant Landlords.  In addition to the house we own, we each have a condo that we bought before meeting each other that we are unable to sell because the market has been so bad these last few years.  Our only choice was to rent these units out until the market improves enough so that we can sell them without having to bring a large amount of money to the table.  We think we are almost there with my Albany Park condo, we are a long way to go with my wife's South Loop Condo.

So here's the fun part of reluctant landlord life.  There is none!

Yesterday I get an email from Kesha, our condo association pres because apparently our fire alarm was making that noise it makes when the battery is low and it was driving her dog batty.  Our condo building consists of 14 units and we are a a self-managed association, which has it's advantages and it's drawbacks.  Kesha lives in the unit above my condo so anything going on in my unit can impact her and vice-versa.

My tenant -- let's call her Irma --  sent a friend over and it turns out it was not the fire alarm but the CO detector.  The CO detector is hard wired into the electrical and she didn't feel comfortable disconnecting it.  I was en route to deal with it myself when I got an email from Irma stating that her
friend had disconnected the detector but it apparently needs replacing.  I was going to order her a new one but she said "I have had a headache during the past 5-6 days and it only occurs when I am in the apartment in the living room.  You may want to consider having the HVAC unit tested." 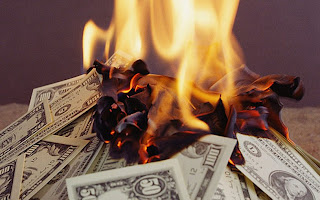 I learned, a little too late, that the gas company will come out for free and investigate.  However, if they find something you have to repair it immediately so you still end up calling someone.  With my luck, if i call them, they find something and I still have to call an independent HVAC repairman.  if I don't call them, the repairman will find nothing wrong.  Guess what happened?

The repairman found no evidence of a CO leak.  He did find a few things they recommended repairing liking cleaning the burner which is almost as expensive as replacing it, which eventually needs to be done.  I opted not to do that at this time.  Normally I would opt to fix it even at the inflated price he gave me.  However,  I'm cash strapped because we had a little flood back in May that I'm still paying for.  and two, I feel like I need to shop around and vette the price he gave me.  heck I might even be able to order the part and replace it myself.  or not.

Update:  I actually went over and replaced the CO detector myself.  I will probably have to replace the regular smoke detector as well and would have gone with a combo if the two units were not hard wired into the ceiling already.
Posted by Icarus at 4:46 PM