Yesterday was a big day.  It was Super Bowl Sunday, Ground Hog Day and the day my grandmother would have been 88 years old.

So we went to Ikea on Saturday afternoon and this is our stop gap solution for the hallway coat room.  At first we weren't sure we made the right decision but once we assembled all four bookcases, 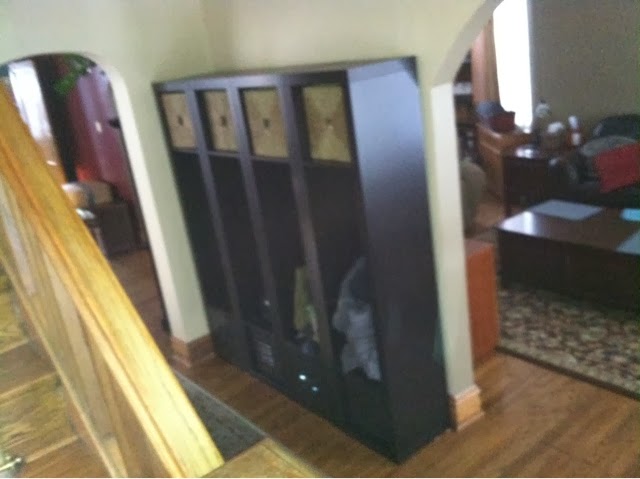 we think it looks good, especially with the two types of baskets we bought.  I still need to buy some hooks so we can hang coats but it definitely helps hide the clutter.

We gave away our Armoire a few weeks ago and it has really opened up the living room.  I'm toying with the idea of bringing up the chair-and-a-half from the basement and potentially the sofa as well.  The problem is it's hard to visualize it without doing it and then if you don't like it, you have to move everything back.

In the evening we rallied and joined Na for her husband's birthday gathering at J Patrick's Irish Pub near SIL old house.  Na and her husband came up from Memphis to see family and settle a few things.  Apparently her condo is under contract which is a huge deal because like us, she is hemorrhaging money on two properties.  Another friend has also put her Lincoln Park condo on the market today and seems to have priced it to sell.

Because of the weather turn out was low so we got more face time with Na than we might have otherwise.  Not saying she would have ignored us, but when you are the wife of the birthday boy you have to hold court.  She wanted the latest gossip on the running groups.


We made the decision midweek to have people over to watch the SuperBowl and invited the group that came last year along with a few additions.  If we had a bigger TV I would have tried to make this a bigger deal but given the weather potential, I figured it would be easier to invite a few people and if no one showed up, we'd have extra pizza.

So Sunday we had three couples over for the super bowl.  If I've learned one thing over the years, it's that my friends don't always cross pollinate well.  SHB and K are opposites when it comes to what they eat and drink  SHB drinks diet coke, K will only drink regular coke.  Since we bought both types and 7-Up to book, naturally they both drank only water as far as I can tell.  Overall I think everyone still had a decent time.  Now if the game were more exciting.

When it comes to Super Bowls, heck any football game really, I enjoy a close contest and we have been spoiled in that most games for the last decade or so have been close. That there was no 4th quarter comeback this year is kinda like the fact that Chicago has had some relatively mild winters the last few years and now we are experiencing a normal winter and don't know what to do with ourselves.

Now that we are into February, I would like to report on a couple of things.  First, according to Daily Mile I ran 46 miles in January.  Allowing for the 14 mile race a few Saturdays ago, that essentially means I've run a mile a day.  I usually run at least 50% more than that in January but I'm also okay with this number because it's been freaking cold and the outside conditions haven't been safe for running.  I should step up and run more inside especially since we have a treadmill that seems to be easier to use than the one at the Office Gym.

Next, while I haven't been truly consistent, I have been working though the Rosetta Stone Polish language lessons.  My plan is to get through the lesson set once on the XP box, then transfer the program to my new Win 8 machine and run through it again.  This is because it is easier to boot up one machine and the hard drive on the XP machine is spinning in such a way that I can just tell it won't live too much longer.

While I tried to avoid it, alas our attic has become our storage area.