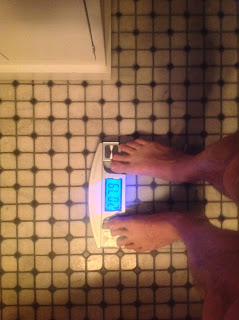 Not unexpectedly, my weight has increased this year.  Less running, more eating not-the-healthiest
foods and partaking of adult beverages at my age equals weight increase.  At a high point the scale read 219 lbs.  I've managed to get back to around 210 with a small resurgence of my running.  Now that we are about six weeks away from winter, I don't expect to lose any more weight because it seems the body is designed to store fat for winter.

I haven't done as much posting here as I'd like.  I work from home on Fridays and that is when I do the bulk of my writing.  However over the summer, my mom has been hanging around and it is hard for me to concentrate and be creative when she is watching TV 10 feet away.  She often hangs out until 9 or 10 which burns my morning and then I have other things to do like my day job.

Speaking of which, my day job is going away.  We got the news the last week of June at the office that we had been expecting for some time now.   My company TopFive has discovered that it is an accounting firm, not an IT firm and as such, it has decided to explore Outsourcing the IT department.  We are of course using the current buzz word "Managed Services" but it is really the same thing.

I don't really want to work for a law firm again but if I have to, knowing what I know about the expectations, I would demand top dollar.   In early September I basically talked my way out of a potential job because my salary requirements are too high.

I saw a job I was interested in several weeks ago and was going to tweak my resume to match it.  Before I got a chance, the listing was removed.  So then I mind-fucked myself by apply for a few jobs before tweaking my resume at all, so I probably screwed the pooch on those as well.

Every 8 years or so, I go through a Sheldon Crisis. In 1999, I lost my job, broke my toe, and was mugged within a two week period of what was already a shitty year.  In 2007, I was on the hot seat at the No-Name Software Company and had to get out as quickly as possible for my own sanity.  I suppose 2009 was a mini-Sheldon Crisis when Fiance 1.0 moved out while I was in St Louis, though the 2nd half of that year ended well.