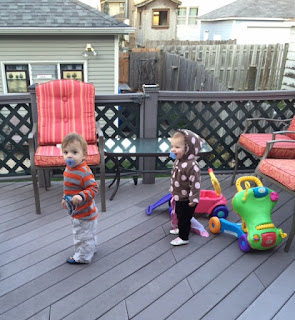 This post was supposed to be published a few weeks ago but I failed to hit publish.

Traffic was light on the way to work this morning, at a time slot where it’s never light.  It's funny how it seems on days that I want to get into work as early as possible so I can work out, we either run late or traffic blows.  Today it didn't matter and I got here at 8:04.

We actually got out the door relatively quickly this morning -- 7:10 -- which is twenty minutes sooner than our average.  Nightingale is a little disappointed because we got up early and had a good start to the day and it slide off the rails a little with our kids.  Natasha was in a great mood because she not only seems to have finally shook off her cough but also passed it along to Boris.  Well played sibling.

A lot of mornings over the last year were a challenge because we were sleep deprived and trying to get some extra minutes of snooze before having to get up and wrangle babies.  Combine that with us not being the most get-up-and-go morning people to begin with and that makes for a inefficient morning.

Once Moose and Squirrel started sleeping through the night, our game improved but not until we had a few months of trying to catch up on our sleep deficit.

I've resolved that my weight it probably going to oscillate between 210 and 215 pounds this winter.  Even with my running 12 - 15 miles a week, my food and alcohol consumption combined with the body's storing of fat for winter will cancel each other out.
Posted by Icarus at 11:28 AM