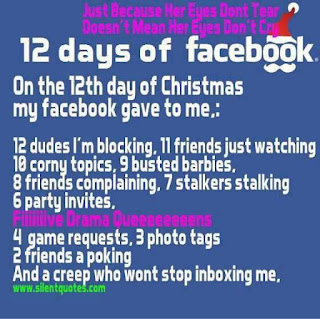 I enjoy keeping up with friends and seeing them unlock major and minor Life Achievements and sharing my Most Excellent News whenever I have some.

What I don't enjoy is the stupid memes that attempt to boil down complicated issues into jokes and zingers suitable for sharing on your Facebook wall.  Both Sides Do This!

On a person level I also don't like that of the nearly 1000 friends I have, I only interact with less than 10 percent of them.  Some of this is by choice, I admit.  Some of it is by Facebook Algorithm where Zuckerberg's drones have determined which friends updates you get to see and which ones you don't based on nothing that makes any sense at all.

Still there are some that probably actively choose to ignore everyone and only post their rants and raves without giving two shits about other people.

Most of my FB friends are from high school, college and ChicagoNow bloggers.  These are also the ones I seem to interact with the most.  Others are people I use to hang out with in the Runner Groups, Catholic Circles or other social scenes from my single days.  There are enough people to form a group called People I Met At a Party Once and Ex Work Friends I Don't Wish a Car Accident On.


Once in a while, I'd find out that someone unfriended me and it would bother me.  Usually because it was an action I did like either out my political viewpoint or have the audacity to have another birthday, thus calling attention to someone who forgot I even existed.  Other times I'm sure it had nothing to do with me per se but someone decided it's easier to interact with a smaller list of people than to have a bunch of outlier friends that clutter their feed.

So it seems hypocritical that right now I'm tempted to cull my friends list.  I'm fine with hiding the ones who post things that are out of alignment with my views to keep it from my feed.  But for some reason I want to get rid of some people I seldom interact with on Facebook or IRL.
Posted by Icarus at 10:28 AM

Email ThisBlogThis!Share to TwitterShare to FacebookShare to Pinterest
Labels: Rants and Ruminations, Two for Tuesday