Traveling with Children is not easy

In case a past version of me travels to the future and reads this:   A 5 hour car ride is just too much for our kids (15 months) to deal with right now. The longest they will nap, especially in a vehicle, is 2 hours so that means three hours of trying to keep them entertained.

Usually traffic and/or construction causes us a delay when traveling between Chicago and Grosse Pointe, Michigan.  This time it was weather.  We left GP much later than we intended because we had been up late trying to get Moose and Squirrel to go to bed.  After  5+ days of doing not thing but wrangle our children, we were exhausted and slept in the first chance they gave us...the day we really should have got out the door as early as possible.  We left GP at 10am and didn't get to our house until 6pm.  [time is in CST and we had two stops totaling 75 minutes.] 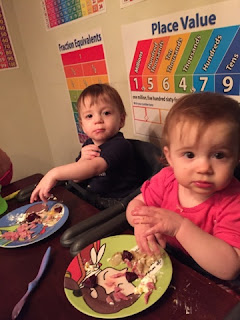 For our entire trip all the routine and schedule was off the books.  Any given night, one or the other wouldn't go down after bath.  Once we finally got the problem child to go to sleep, the other one would wake from a power nap and it would be hours before they succumbed to fatigue.

On top of this, they only wanted to be with Nightingale or me, and usually had to be held.  And not just held but sometimes they require that we hold them while we are in the standing position.  I guess the atmospheric pressure or pull of gravity is noticeably different from that height.

*******
Goals for the Year:   According to my DailyMile, I just need to run 6 more miles to have 300 for the year.  While that is not anything to sneeze at since some people never run that much in a lifetime.  Still it's a little sad that each year my miles logged is more and more diminished.

This also assumes I will be able to get those last 6 miles in.  A small but not insignificant part of not being able to get out for a run is because of Moose and Squirrel.  Before I figured out how to run before work, I often skipped the lunch time "Runch" or didn't run after work because I wanted to beat traffic and get home at a decent hour.  Getting away on weekends required a lot of moving parts to coordinate.

I had also wanted to get a few more projects completed around the house but expenses prevented that.  On the plus side, I finally have my credit cards under control and have officially paid off the damage caused by that flood.  Technically I paid it off a long time ago via the credit card roulette game of juggling debt and kicking the can down the road as long as possible.  House maintenance ain't sexy but you have to do it.

Email ThisBlogThis!Share to TwitterShare to FacebookShare to Pinterest
Labels: life with twins, Two for Tuesday