We have two major electrical issues with our house.  We knew about these issues when we bought the place and we did receive some monies to deal with them.  and that time has come.The first is the electrical panel is not up to code.  The second is the power line supply from the pole is too close to our deck.  Our deck should not have been built they way it is and likely did not have a permit.


At this point its' a Matryoshka Doll situation.  If we are going to change the panel we might as well upgrade to 200 amps.  But to do that means a bigger "pipe".  And the only option is to put it through the roof soffit because we have too many windows to simply move the wire, or so I was told.

However, it took talking with 4 or 5 electricians to determine that "well code doesn't allow me to do that" really means "that's a lot more work and I'm going to make it cost prohibitive for you to do so".

Here's where things get a little murky.  For one thing, we don't know if we are going to be in this house for one more year or 10 more years.  If we are staying, I might seriously consider paying the extra money to have the panel and the pipe moved.  Except we aren't just talking a few hundred dollars more.  The work involved is such a headache that even if I find an electrician willing to do it, it won't be cheap.

And then there is the paying for the work.  I've received quotes for the entire job ranging from $3k to $6k and most of these guys don't take credit cards or offer financing (except the $6k guy).  I thought I'd be cleaver and buy a panel upgrade from Angie's list and then get the same guy to do the rest of the work.  However, the guy I got told me it would be an additional $2800 to do the rest of the work, which puts me in a pickle.  I got a quote from someone who said they could do the whole job for $2600 including the panel.  So which guy is lying?

The guy I'm going with couldn't explain to me why the job is going to cost more than the other guy.  And the first guy isn't returning my calls to see what it would cost if I did the panel first, because why would he. 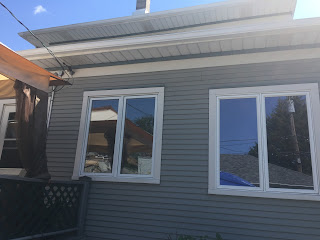 Jesus suggested that he simply install the 200 amp panel but leave the 100 amp service.  Then I could get whoever I want to do the rest of the work at a later time.  I'm going with this approach because it gets us further along.


The typical Angie's List panel install is $875 (allegedly marked down from $1100).  Panels cost about $100-200 at Home Depot.  I'm guessing you can buy more expensive ones but not not $1k more so the rest I assume is installation hours and some profit.  Assume $150/hr for an electrician.  I was told it will take about 5-6 hours for the panel installation.  There isn't a lot of profit involved so my guess is that this is a way to get into a customer home and get some other electrical work while you're there (i.e. the upgrade to the 200 amp service, the new lights I'm gonna have the guy install in the laundry room while he's there).