To celebrate it's anniversary, my not so new company had an outing to the Cubs game the other day.  Because I was allowed to bring a guest and because kids under 2 get in free, I decided to make this our kids first (and perhaps only) Cubs game.  I'm not much of a go see the game in person type anymore.  Unless you pay a fortune, you can usually see the game better from your living room or even a sports bar, which is vastly cheaper. 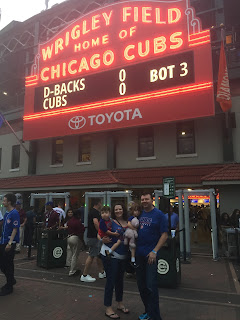 But as this cost us nothing, except the $100 we spent on Cubs T-shirts for four, for the occasion,  I figured why not.  Especially since I knew we were not likely to spend more than a few innings there.  Nightingale was stressing because she forgot that I told her kids had to sit on our laps and our seats initially were not together.  They were three seats apart, which isn't the worst thing because even total strangers would probably switch with us and I have to believe most of the over 2,300 registered people from my office would as well. 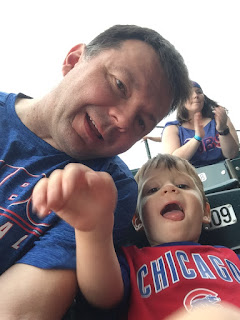 Think about it, either the three people between us know each other or they don't.  Does person in seat two really care if they sit on the left side of these other two or the right?  It worked out even better because when we got to our seats there were plenty of open seats avialable, probably because all the youngins were still drinking free beers and watching the game from the pre-game reception at Brickhouse Tavern.  We took up the seats we needed but were prepared to move if needed.  Alas that never happened because we only stayed for 2 innings. 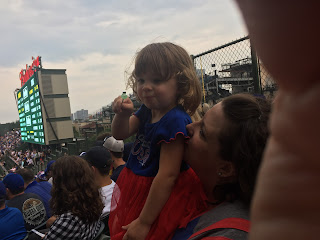 I should note that when we were asked to request our tickets, I did ask for two, as I'm sure most people did.  I don't know why they didn't group people together, i can only imagine something "fell apart with the planning-implementing phase of this task".  When I went to pick up the tickets, the line was long and I went on the last day.  But since the tickets were free, and the firm bought me beer and appetizers, I am not complaining.

Katness, who coincidentally was at the game the next day for free as part of a work function, has invited us to see the White Sox for Family day in a couple of Sundays.  This isn't free but is a reduced cost so we can now check off 2 of the 5 major Chicago Sports teams.  As big of a Bears fan as I am, I will likely not take my kids to Soldier Field for a long, long time because football fans are assholes.
****************
Thank you for reading and I hope you will comment below.  Please also do any and all of the following:
Follow Mysteries of Life on Twitter (@MysteriesOLife), Facebook or subscribe via email.
Posted by Icarus at 7:00 PM