﻿
﻿ The weekend was awesome in that we didn't have many obligations. A lot of our weekends are what I call Swiss Cheese Weekends. We have a couple of things planned and have pockets or holes of time between events which are not really enough time to do anything but are too small to go unnoticed.


I anticipate that most of my Fridays this summer will be spent at home since I have to get up early for Group Leader duty. When I was single and younger, I still went out on Fridays and would do a lot of my LRs slightly hung over. Usually by the first mile the blood was flowing enough to snap me out of it though I do recall a run or two where I probably would have been better off sleeping in. That behavior not only won’t fly at my age but also is unnecessary. Though it wouldn’t hurt my feelings to have a short beer with a friend and make an early evening of it.

So my first group leader run was fine. I was surprised to see that my old co-group leader wasn't there. His platonic girlfriend told me he's training with another running organization this summer. So instead I had two new GL to work with. As far as I'm concerned, it's there group and I'm just here for the ride.

Our distance was 7 miles for novice and I did about 6.6 (took a pit stop at the restrooms near the turnaround point). I picked a good week to come on board because not only is 7 miles well within my current ability but also this coming week is a cutback week so the mileage will drop by 2 miles. Although everyone will probably want to do 7 because Marathoning = ego and at this point, 5 miles seems like too short of a run.

Saturday night we went to my friend L’s Annual Taste of Randolph party. L lives half a block from the fest and has had a party in honor of that for the last couple of years. We brought along DrDrea who aptly described it as basically a college party for 40 year olds.

It’s sad but true. Many of the ladies there missed their window of opportunity on catching a guy when they were younger and hotter and are trying to re-capture that lost youth. And why do I say such a judgmental snarky thing? Because those are the type of women who wouldn’t give me the time of day when I was the younger guy referenced in paragraph two. These same women didn’t seem to notice Nightingale or my wedding ring until I blatantly pointed it out.

Sunday was a lazy day of doing nothing except hit a few Open Houses. I’ll post those stories separately. SHB and Nightingale have been hanging out by hitting the gym on Sundays, and she came along for the OH in Logan Square. She liked it, said we should buy it. Of course that was from the lens of someone not truly invested in the decision as us and not thinking beyond the initial warm rush that seeing a home that you could buy brings.

We all went back to our place to hang out on the newly decorated deck. A few weeks ago we bought some new furniture for the deck and got the planters out and filled. Nightingale also bought a deck rug which pulls it all together nicely. 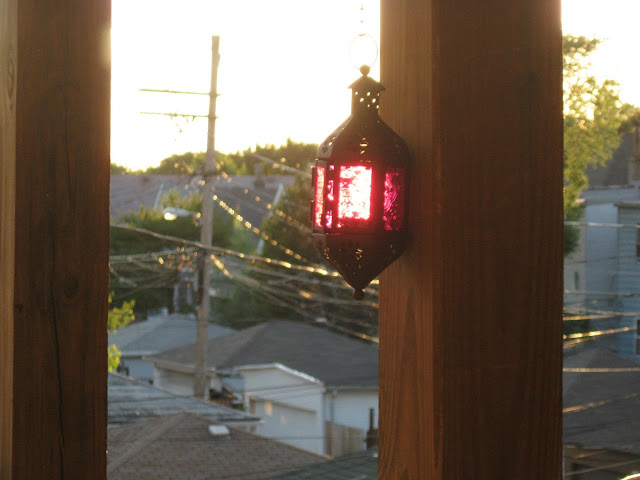