From Muscle car to Utility Vehicle

So I wrote about our dilemma with the car situation a month ago.  My 1997 Mustang was falling apart system by system and was basically unsafe to drive.  While Nightingale had the option of using public transportation, it came with limitations.  When she worked late she still had to take a taxicab home, which is costly.  She also could not fit in a workout before or after work because it isn't easy to get to the gym on her way to or from work.


We had evaluated the pros and cons and were just waiting for something to tip the scale.  I even wrote a few Internet pundits I follow about my situation.  Here is what Tara Nicolle-Nelson of Trulia.com and Trent of TheSimpleDollar.com had to say. 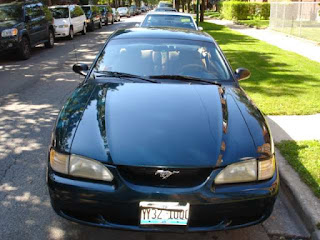 It finally came to a head shortly after that post when a snowstorm hit Chicago on Friday while she was at work. Since we knew snow was coming, I had the Trail Blazer and she took the El to work.  While it was nothing like the Stormaggedon of 2011, it did slow down the city such that traffic was crawling along.  That meant she would either have to spend a fortune on a cab or suffer two hours on the CTA to get home.  Nightingale basically said we had to get a second working vehicle immediately.


The follow week, her dad was in town helping her sister get ready for the move back to Michigan.  In between packing, he helped me research used cars.  I wanted the flexibility of something that could haul a lot of stuff since I have gotten use to Nightingale's Trail Blazer.  We also needed better fuel economy with my 25 mile daily commute to work (one way).  Several friends have Honda Elements and they give them good reviews. My research shows that they get at least as good of gas mileage as my mustang, though perhaps slightly better depending on year. Plus I kinda like the idea of throwing our bikes in the back and going to the forest preserves for a ride. Currently, it's a hassle to put the bikes in the Blazer or use the bike rack for the Mustang.

So mid week her dad (the FIL heretofore) was getting stir crazy and wanted to head home.  Translation: being in a house with two noisy and very young children wasn't his cup of tea.  At the beginning of the trip he said he would stay as long as he was needed.  After a few days he was already mentally packed to go.  Nightingale begged him to stay throughout the weekend to help us find the right Element.

﻿
﻿I was fine with finding the cheapest one available.  Nightingale on the other hand felt that we should get one with the fewest miles possible.  No easy task since Element owners typically tack on the mileage -- I guess they feel they need to get their moneys worth and do the toss-the-bikes-in-the-back thing as often as possible.  Needless to say, Nightingale won out on this point too.  She felt that the less mileage and newer the vehicle, the longer it will last and the longer it will be before we need to put money in it for repairs.  For those keeping track at home, Nightingale 2, Icarus 0.
FIL managed to find two Elements that would fit the bill.  He had found one earlier in the week but it was gone by the time we decided to go look at it.  That did make me feel vindicated that my choice of an Element was a good one.  Unfortunately, the two he found were at dealerships that were difficult to get to and not conducive to going back and forth for comparison purposes.  We also had a house viewing scheduled for the middle of the day that we couldn't reschedule.  It made for a long day.

We went to the first car dealership and drove around the lot.  Instead of the red Element we were expecting, there was only a grey one.  While not a bad looking car, I just didn't have a good feeling and never stopped the car. Instead I had NG punched in the address in the GPS for the second car and headed out.

On the way we made a pit stop at a tollbooth oasis in order to use the restroom, get some coffee and call the place to make sure the car was still there.  My FIL made the call and instead of just asking if the car was still there and getting off the phone, it sounded like he was becoming BFFs with the sales person. 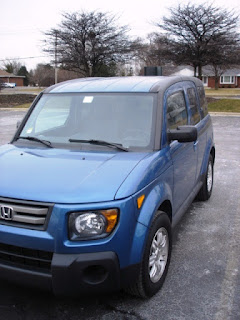 We get there and drive around the parking lot.  The Element is there and it's the correct one. So we go inside and find Harvey.  Harvey, originally from the UK, is a young Indian guy who reminds me of some of the consultants I worked with at the No-Name Software Company.  Definitely not your typical used car salesman and in fact a rather sharp guy.  He takes us for a test drive and gives us a tour of the Honda Facility.

We like what we see and decide to buy the car.  Then the negotiating began.  With the two previous cars I've purchased, I never felt like I got the best deal I could. So I really wanted to hold out for the best deal I could get.  I was ready to go to the mat over price, trade-in-value and even financing.

Alas, thanks to the internet, there isn't as much haggling as there was the last two times I did this (2001 and 19 ninety-something.)  We already knew what the car retails for and what we could expect for our trade in (not very much).  What drove me crazy was that when Harvey came back with the value of the trade-in my FIL said "that's what you expected."  I was like, way to show our cards.

The long and short of it is this is the car I wanted and Nightingale was not going to get back into the Mustang-with-no-brakes so we negotiated a good interest rate for the financing and were ready to call it a night.  However the lady in the financing office was determined to sell us one of the add-on packages.  We didn't want or need it, but she was able to lower our interest rate to 2% so our payment stayed the same.  We figure she had an end of the month quota to met.