I bought a Mr Beams MB360 Wireless LED Spotlight with Motion Sensor and Photocell for our back deck because I wanted some extra safety and security for our new home.  The previous owner actually has a motion sensor light above the door but for some reason it isn't working and is at the moment beyond my ability to fix.  Someone on the now retired Everyblock.org board recommended  Mr Beams MB360 Wireless LED Spotlights so I decided to buy it.

I mean come on, it's "Weatherproof" and has 140 Lumens, that sounds like a lot of lumens to me.  I was even able to buy it with my  Discover Rewards Points so it technically cost me nothing, though I might have paid something since I opted to get extra batteries.

Either I got a lemon or this was just too good to be true. I left it in my basemen laundry room because it was too cold to install outside and it seemed to work fine. Once I took it outside however, it failed to function properly. I suspect either the cold was too much for it, or there is too much ambient light from other sources confusing its little circuits. 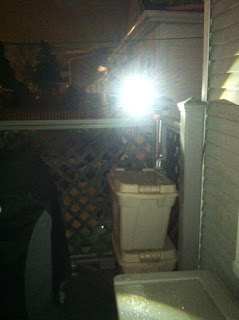 I posted a review that said as much on the Amazon and got the following response from the Manufacturer:


It sounds like it is an issue with the ambient light level and the photocell in the unit. Please contact us at info@mrbeams.com or call (877)298-9082 for support in getting the light to work properly for you.   That was in January.  There were a couple of volleys of phone tag and then finally a guy managed to get ahold of me live and offered to send me a replacement light.  He asked that I send back the broken one but didn't have to if I didn't want to bother.

It was two more weeks before I finally got the light and then a couple of days before the weather was hospitable for me to install the new light.  I'm proud to say it worked like a charm.  I sent back the broken light and after words got the following email.

I wanted to follow up on whether the MB360 replacement I sent worked in your applications. Please let me know if it is working properly.

The replacement worked from the very beginning. I could tell once I put the batteries in that it was functioning differently from the broken unit it replaced. I think you were correct that the photocell was damaged. This new unit is off during the day and comes on at night when I approach the back door where it is situated. It turns off after the appropriate amount of time.

I sent the damaged unit back to you in case your crack team of ninja technicians want to perform forensic analysis.