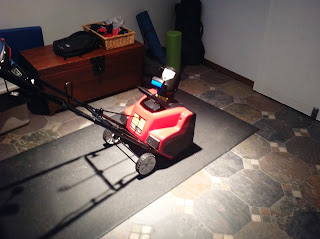 Buying one of these was supposed to guarantee no snow:  A couple weeks ago I bought this on Woot.  I didn't want to outlay the cash but it was on sale and I figured I'm going to need one eventually.  I was looking forward to using it last Friday but by the time I got it assembled (less than 5 minutes) my neighbor had already plowed the entire block...with the exception of the last two houses on my side of the street.  I don't know if this is because he ran out of gas or there is something else going on.  I expect that when the weather gets warmer and we meet our neighbors on a more regular basis, Nightingale will pick up on the subtle alliances and secret wars that we will have to navigate.

Alas, it looks like I will get another chance to use my snow blower tonight as we are expecting anywhere from 6 to 60 inches of snow if news reports are to be believed.

Another quick weekend: On Saturday for a belated Valentine's Day present I got Nightingale a massage and a facial at a spa not too far from our house.  I got one myself because she appreciates the effort I make not to look like an old man too soon.

Saturday night was GNO and I was looking forward to doing anything other than what I ended up doing: trying to set up DSL at my mom's house.  We are supporting my mom financially which is not a pleasant situation to be in.  We added her to our family cell phone plan and for the first time in a long time, received one of those you are 50% over your data package.

Nightingale panicked and, thinking my mom was using her phone to surf the entire Interwebs, canceled her home phone (she was using for dial-up) ordered her DSL.  It turns out that it wasn't her using too much bandwidth somuch as three people on a plan are going to use more than two.  In fact when it was just us two, we used just under 50% of our data plan on average.

We were planning on getting my mom off dial-up anyway because it would be cheaper.  The problem is multi-fold.
So it took a visit from ATT to come out to the house and re-wire her jacks.  Apparently the guy who came on Thursday/Friday didn't think to do this, probably because he was scared of being in Humboldt park and wanted to get the hell out of there as quickly as possible.

He also set up her wireless for her.  He did not however move her credenza back against the wall and she really, really, really needed me to come move it because it's so heavy.  And if she doesn't move it back, her cats will chew on the cords.  This is where I lost it.

Growing up, one of her many warcries was "Didn't it occur to you to..." followed by "use your head."  Apparently I was expected to have the foresight to anticipate the unexpected and act accordingly.  So it is one of my trigger buttons when she fails to troubleshoot anything on even a basic level.  I was pissed that she didn't even try to ask the guy to move her credenza back for her.  I basically lost it over the phone and Nightingale had to take over and finish the conversation.
Posted by Icarus at 2:00 PM