Scattered Thoughts with a Chance of Making Sense


Things take so much more time and effort these days:  First, nothing really writes to hard memory these days.  For instance, I got a recall notice for my Element.  I contacted the nearest dealership and they ordered the needed part.  I got an email that the part arrived and I should call to schedule the service.  It's been two days and I still haven't set that up.  I meant to, but it just slipped my mind. 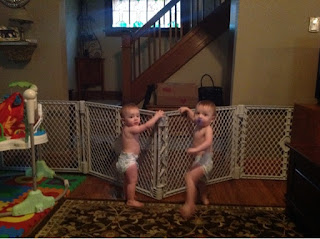 I cannot remember if it was Moose or Squirrel who got up in the middle of the night and needed a bottle because the nights all blur into one.

They are almost 11 months and most of it really is a blur, we went through a high learning curve.  In the early months (after day care but before they could crawl) we would put them down for the night around 630-7 but they would sometimes wake up 30-45 minutes later, right when our dinner was ready.  Now once we get them down, they are down for at least 4-5 hours.

The good news is we seem to have turned a corner and they are sleeping a little later.  Now it's closer to 6am.  Natasha was waking up because of her cough and i figured out that if we turn the humidifier on, she sleeps better.  we stopped using it because of the summer but ....

The only help we have is my mom and she is a piece of work herself.  I half joke that we have four kids: our children, our furbaby Austin and my mom.  She is over here ever night now and she is constantly challenging us on how we want to do things.  We think she enjoys having the house to herself when we leave for work in the morning....however, when I work from home, she hangs out a little too long.  My mom  doesn't understand the concept of personal space, privacy or alone time because she has an over abundance of these.


Update:  when I drafted this post,  Austin was still with us.

It's like Day Break but without the time travel: When I'm away from this blog interface (be it the laptop, desktop or iPad) I think of all sorts of things  I want to write about but once I get in front of the keyboard, the thoughts go away.

Our daily routine is like Groundhog Day or Day Break.  Except for the learning or remembering enough to change things part.  I really thought Nightingale's family would visit more once we had children.  Apparently the chances are higher of some random stranger giving me chocolate and a million dollars.

At home the default status is I'm holding at least one baby or watching to make sure they don't kill or injure themselves.  Traveling 300 miles to another zip code is insane.  I not only get to hold a baby but I have to make sure the Little Monkeys don't accidentally harm my kids.

The Little Monkeys aren't malicious or inherently evil.  They are just two adolescent boys who want what they want when they want it and cannot be reasoned with at an adult intellectual level.  They don't understand how easily they could inadvertently hurt Moose or Squirrel.  Additionally, they are easily distracted so even if they are playing nicely with their cousins, they are just as likely to abandon them for a game of Mine Craft if the mood strikes.

This is fucking stressful to me. I don't mean to sound like a helicopter parent but the kids are still squishy.  They are at a developmental stage where a head injury could impact them for life.  and they are already destined for public education!

And they don't do so well in a different time zone so I'm sure DST is going to suck big time.

Email ThisBlogThis!Share to TwitterShare to FacebookShare to Pinterest
Labels: life with twins, Rants and Ruminations, Two for Tuesday