I'm not even going to qualify that with a probably.  Even though there are 80 days left in the year, it is reasonable to say that I'm not gonna achieve my goal of running 40, let alone 45 miles a month. 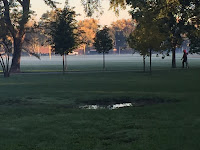 Today's run was only meant to be 3 laps around Portage Park because that's how much time I had to squeeze in before work.  And while my pace was better than usual, it still was no where near the effortlessness I once recall.  And running hasn't been effortless in I don't know how long.

Part of me just wants to stop running for the rest of the year and focus on swimming.  It's easier and I get a better workout in less time.

So  I think I might finish out the month or reach 300 miles and then just take a break for a while.  Maybe start up again in the Spring.  I'm not saying there will be no running between now and then but it might be better to switch gears and focus on swimming and weights and other cross training.
Posted by Icarus at 3:33 PM