The last 24 hours have been exciting for Chicago

The last 24 hours have been a whirlwind of activity for Chicago in general and House Icarus specifically.  My kids went Trick o Treating for the second time in their lives, though they probably 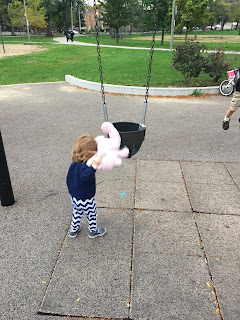 don't remember the first.  We made the rookie mistake of giving them too much candy.  So not only did Boris throw up dinner, but both he and Natasha woke up in the middle of the night fully wired and ready to Par-tay.

The Bears gave Vikings a beating, which as I said before, I expected them to, not so much that the Bears are vastly improved but Minnesota is finally being exposed for over-achieving this season.

Cubs fought to stay alive by winning Game 6 last night in resounding fashion.  I noticed that they lost 1 game in the NLDS, 2 games in the NLCS, and now 3 games in the World Series.  I'm hoping they will win tonight, but even if they don't, they have done a lot to put to bed goats, black cats and curses.

I suspect tonight's game will be a lot of small ball.  Get a man on base, advance him to scoring position.  Lot's of pitching changes to get desired match ups.  Since the Cubs do better when I don't watch, I might just not tune in until the last inning.  Honestly, this staying up so late isn't doing me any favors.

Over the weekend we got family haircuts at a place not too far from our house.  I'm always looking for a good haircut options and since I don't go to my inexpensive place in the burbs anymore, Halo was turning out to be too much of a dent in my wallet.

We put away some of the toys to make room for more toys.  And yesterday my cousin texted me to tell me that they were about to pick up a baby they were adopting, born on Oct 26th.  So yay, more cousins.
Posted by Icarus at 9:14 AM