Recruiter: Hey we are looking for a LEFT-HANDED WIDGET Maker. I see that you are a Left-handed Widget Maker. Are you interested?

Recruiter: Great, send me your updated resume. Because the resume I have, the one that shows your vast experience of being a Left-Handed Widget Maker just isn’t good enough, for reasons.

My frustration is that 1) if I were still working at my last employer, my resume would be fine and 2) the contract gig I’m working on isn’t a game-changing experience. No one looking for a Left-Handed Widget Maker will choose me over another LH Widget Maker based on the 6 months of pushing a button on a lame project that I’ve been working on.

Posted by Icarus at 9:33 AM No comments:

And now it's April

I thought I'd do a quick update just for the sake of posterity.

My contract was extended until July, even though I still have relatively nothing to do.  The PM is a bit more polite but still asks us to do stuff she could and should do herself.  I understand and am all about delegating but in the time it takes her to ask us to do something and then explain what she wants because she didn't communicate it properly, she could have completed it herself.  It just boggles my mind that someone like her is gainfully employed and I'm struggling to find permanent work.

Speaking of, I had interviews with three places that seemed promising.   One was another contract job that would have kept me employed for the year at a decent hourly rate.  It wouldn't have been joyful work, nor anything I could really leverage to a future position, but it would have been steady income.

The other two were consulting gigs with benefits that would have kept me busy and gotten me back into the No-Name Software ecosystem.  There are some law firms that have remote positions available but the caveat is you have to work in a state where they have an office because of taxes.  Or so I'm told.

Both consulting gigs eventually reached out to say they were moving forward with other candidates. That's about the best answer you can get legally.  The first consulting firm said they were trying to fill multiple positions and had a backlog of projects, so it technically doesn't make sense that they didn't bring me on.

I'm still going through the PSTD that my Office Nemesis from the last job put me through.

On the homefront, I'm going through the stuff in the box called Memory Vault.  I have scanned some old stories that I wrote ages ago and now they will collect digital dust instead of paper dust.  I'm also reading and shredding my old Journals.  Honestly, I should just shred and skip the reading part...do I really need to read 8 years of journals?  And that was before I switched over to typing my journal on a computer in the 90s. 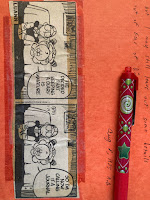 Finally, my weight is hovering between 206 and 212, give or take. I managed to damage my right knee, so even running a mile is out of the question right now.

Email ThisBlogThis!Share to TwitterShare to FacebookShare to Pinterest
Posted by Icarus at 12:46 PM No comments: