Last spring we signed the kids up for soccer.  This was our first experience in small-town suburban soccer leagues.  As I recall practice started in February, although a good portion was rained out.  I think we had some makeup games too.  We didn't do too well because we played against teams with bigger kids but I think we actually finished .500 depending on how the makeup shootout went.  We had to miss the last game because of our travels.

Boris was not interested in soccer because of his...let's call it neurodivergence for now.  Natashia loved it, however, so we signed her up this fall.  Unlike the spring league, her games are at 6 pm or 7:30 pm.  Her team is called Bronze. 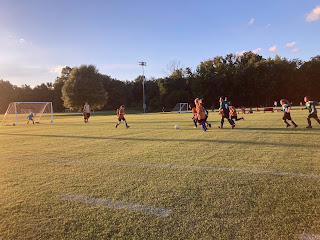 Her team is surprisingly undefeated.   =Since I'm working West Coast hours, I haven't been able to attend too many.  Last night I was able to attend but there wasn't much going on at her end of the field (defense) because our offense kept the ball at the other goal zone most of the game.

Natasha plays defense and in this league, they play 3 players across the goal (I'm sure there's a formal term for that).  There was one game early in the season where Natasha kicked the ball as hard as she could and it went all the way across the field into the other team's goal, cutting their lead 2-1!  It wasn't because she intended to do that; she couldn't repeat it if she tried.  Instead, no one expected the ball to travel that far so everyone kinda ignored it...including the goalie. Posted by Icarus at 4:30 PM No comments: