I saw this on Twitter but cannot find the tweet because I forgot to like it.  Or maybe I did but the poster took it down.  Anyway, the joke is:

Made me some Avocado toast. I guess I’m not buying a home anytime soon 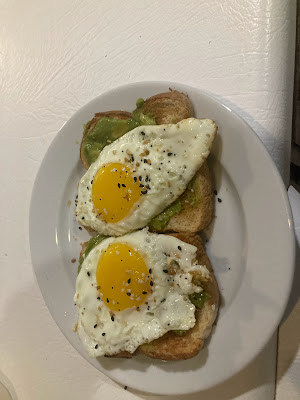 These turned out to be delicious.  Now i just have to figure out how to flip them over without breaking the yokes.

Posted by Icarus at 2:29 PM No comments:

Good Bye ChicagoNow, it's been a slice

I started blogging at ChicagoNow on October 1, 2012, although I haven’t really published much since Boris and Natasha were born. Anyway, the Powers-That-Be at the Chicago Tribune and Alden Global Capital closed the site down today.

No one communicated anything to us either by email or on our Facebook Group. We knew it was coming when our last community manager resigned at the end of June and said we’d heard something in a few days.  And honestly, I suspected the end was coming when our first and best community manager Jimmy Greenfeld took the trib buyout and left.  Then the annoying ads in the middle of our posts came.

Some bloggers continued to post even though the Front Page (landing page, home page whatever term you prefer) wasn’t updating. A few bloggers wrote goodbye posts that apparently caught the higher-ups’ attention because those were taken down.

It’s kinda crappy the way they chose to go about it. Some of those blogs brought in large audiences which I’m sure led to decent passive revenue. I suspect our site didn’t cost them much especially once they cut the monetary rewards for Best Post and Best Gallery (which I won a few times).

No skin off my nose as I wasn’t one of the paid talents (they use to pay some of the heavy hitters but stopped that years ago and the heavy hitters went elsewhere). But I was hoping to post a Last Post on my blogoversary in October and was also hoping to link to a podcast I might be on; the ChicagoNow traffic would have helped.

When I  joined CN, if you wanted to get a space there,  you needed a pitch.  My wife and I were house hunting and so Adventures in House Hunting was created.  Ironically, sometime after my first or second post, we made an offer on a house.  That house would be the home my kids were born in and filled with treasured memories.

At some point, our Editor announced that you could blog about anything you wanted.  Spoiler alert: you always could, but this just made it official.

It was like Hogwarts for Bloggers.  I know with Rowling's TERF issues that reference is not as pure as it once was.  I said what I said.

I made many virtual and even real friendships with many bloggers here.  I also pissed off a few and we are no longer FB friends.  boo hoo.

Some people were really cool, including the heavy hitters.  They gave my Fan Page a like when that thing had more currency than it does today.  Others felt it was a zero-sum game and wouldn't click the button, which is fine.  Except for the one person who kept asking me for tech support but couldn't click like.  WTF.

Posted by Icarus at 4:33 PM No comments: