Since I get asked now and again, I thought I’d write my thoughts down.  This is more for me though I will certainly send people this link when they IM or email me and ask.  (If you've been sent the link, you might want to skip to the Here's the Plan down below).

While I don't have any marathons planned any time soon, I do believe there is at least one more marathon in my future.  Possible a few more throughout my sunset years.

If I'm gonna run a marathon, there has to be some extra prize at the end.  Since my first marathon in 1998, I've run 22 marathons so I certainly have proven that I can push my body through 26.2 miles of pavement and in spite of the cliché, for me it's more than just simply finishing. Last year's marathon in Detroit was about overcoming the ego and proving to myself that I still had it.  Mission accomplished.  Now I don't want to run/walk another marathon again.  So the next marathon will at the very least be about running at least 80% of it before bonking.  Hopefully it's about more than that.

The other things to keep in mind is that training for a marathon is a big commitment of time and resources, especially if you're gonna do it right.  My first two marathons I did half ass and the results back that up. The typical training schedule is 16 - 18 weeks and it gets old getting up early to run to beat the heat or trying to squeeze a run in during lunch or after work.

When you train for a marathon, you find yourself married to a training schedule and making the time to run those miles can be tricky.  Most people think that you just go for a few runs on the weekend and before work and you're set.  No Charlie, it's much more than that.  When the mileage gets high, it takes even the fastest runners at least an hour to cover the mid week long distance and that isn't factoring in the time to change in and out of your running clothes and showering.

When I started this marathon business, I did one a year.  After a few years I got the crazy idea that in order to improve, I needed to keep my running base up all year so I would do winter training which eventually led to spring marathons because if you're gonna do the work you might as well get the results.  So I switched to a two marathon a year schedule which foolishly morphed into doing three marathons a year at one point (2007, 2008).  This led to injury and along with old age, has cut my marathon career a bit short.

Alright so here's my plan:  For 2013, I will not sign up for nor run a marathon. I will instead focus on increasing my running stamina which means 10 milers and half marathons in order to accumulate the appropriate mileage.  Assuming all goes well and I can run distances greater than 10 miles without petering out the way I sometimes did last summer, I'll move on to increasing my speed.

That will mean sped work and a marathon in 2014.  My hope is that I'll be able to do one more gracefully than the Detroit Marathon in which I essentially walked at least 10 of the 26 miles.  The ultimate goal is to be able to qualify for Boston Marathon although I really will be happy to just run a marathon from start to finish in less than 4 hours. 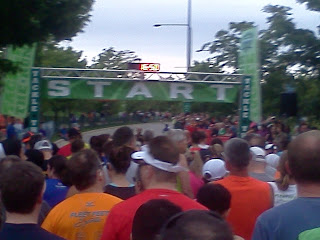 So the caveats.  If it doesn't seem like I'm going to achieve any of the above, there's no need to run said marathon.  If my running stamina doesn’t' return to the levels it was in my mid-thirties then I'll be content with just running a maximum of 6-8 miles on weekends and 3-5 miles on week day runs.

Also if Life Gets in the Way and things are too busy to maintain a marathon training schedule or even a consistent running schedule than all bets are off as well.  If Nightingale and I have a kid or two, that would certainly truimph any marathon comeback for a few years if not forever.
Posted by Icarus at 2:30 PM