So it was a busy and somewhat awkward weekend.  At work we have been doing some community work with the the Northern Illinois Food Bank.  They asked everyone to volunteer for a day or half day and I opted to do two half days thinking I'd get out early and could beat traffic home.  Once I realized just how freaking close to Iowa the Food Bank is, I revised that idea and went to Plan B:  social maintenance with Suburban Friends. 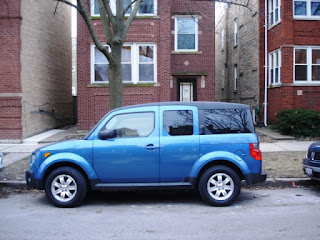 First, I dropped off the shelf for Montana1969.  She lives 10 miles from the Food bank so it was
more or less on the way.  I hung outwith her and her finance CMB.  I told her about my cousin of
the same name and her heart condition but didn't go into the part that would cause CMB and I to butt heads.  He's pro-Life and I'm the devil for being Pro-choice.  And Cousin needs her some birth control to prevent a pregnancy that would kill her.

My cousin almost met the Grim Reaper which has kinda freaked my blood related cousin out.  That's one of the Dark Sides of Marriage that they don't tell you about -- eventually, someone has to leave first, be it death, illness or other.

Later that evening I met JV and her crew at The Club House.  the Club House is the cougar central of OBT -- JV likes it because of the free buffet and dancing.  The last time I was there, I got home late and was thrilled to find a parking spot across the street from my condo.  I was less thrilled the next morning when I discovered someone had stolen my catalytic converter stolen from my Honda Element, so at least this time I didn't have that memory to re-live.

﻿
Saturday was a bit of running around and a bit of organizing.  I bought this desk from 3flat and
the idea is to set up our home office so that there are two work stations that one can easily plop a laptop on and do some work.  It could also double as a baby changing station if the need should arrive.

Sunday we had a P10 brunch which was a little chaotic.  It started out okay.  but since we were
late and everyone caught up with one another, we kinda got pounced on as fresh meat. One of the things I truly hate about social small talk is when personA asks me a litany of questions, most of which are Icarus-FAQs because they already stalk me on FB, and then as soon as they are done, PersonB walks in and asks the same exact questions.  I'm like, really  you couldn't get here when the movie started!