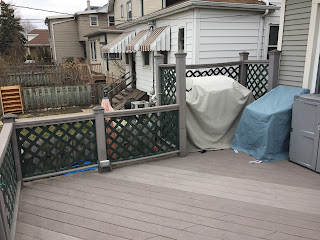 We’re having a cold spring here. The relentless chain of nor’easters probably has something to do with it.. In late afternoon, it’s usually in the mid to high 30s, and with the sun out, that’s not too bad.
It’d be a gift in January, but in late March, it feels like I’m being robbed of something. And it’s all because of the light. We’re well into Daylight Saving, and I’d like to take an outdoor run from time to time, maybe work in my garage or backyard, but it’s so cold. And I'm so old.

This time of year when I need to address home improvement projects.  We have many.  We can only take on a few.  So I have to choose the ones that add value to the house, or more realistically maintain it.  Secondly, things that improve the comfort level while we are here.

This year's big spends will be replacing the railings on our backyard deck and if there is any money left over, some type of cooling system, either split ductless or space pack, because I'm tired of window units and NG is tired of them too.   Included in that, we hope, will be some resolution for our cold basement. 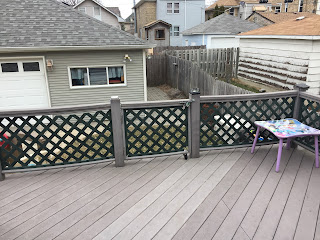 I actually tried to get this resolved last year but I contacted people who like to build new decks, not do maintenance on them so it didn't go anywhere and I updated the electric panel instead.

So I reached out to my neighborhood handyman, just asking if this was something he did or if not, could he recommend someone.  He wrote back saying:

"My guys are tied up and will not be able to get to your work in any kind of timely manner."

Thus I was told, in the coded language of handy man customer service, to go fuck myself.

so then I decided to use Yelp to find a handyman who could do this.  I got almost a dozen responses.  Even though you include all your information, most of the responses asked for numbers and addresses.  I sent pictures, descriptions to both the Yelp proxy and the email addresses they gave, and even texted a few people.  I narrowed it down to half, based on my sense of whether they truly understand the scope of the project. 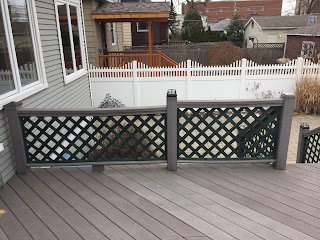 Do me a favor? Click my "like" button and join our Facebook community.
****************
Thank you for reading and I hope you will comment below. Here's the part where I beg for stuff because we get paid in likes, shares, re-tweets and feedback. If you like my posts, funnies and random facts, please also do any and all of the following:
Follow Mysteries of Life on Twitter (@MysteriesOLife), Facebook or subscribe via email.
Posted by Icarus at 2:14 PM