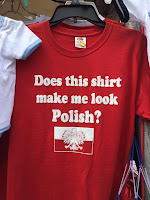 This was perhaps one of the best Labor Days I can remember in a long time. That's not to say the last
few have sucked or anything but this one had the right combination of just enough to do to keep busy but not too much to be overscheduled.

Nightingale had taken most of last week off in an attempt to get the house better organized and work on some pet projects and also maybe engage in some personal she-time (massage, pedicure, etc).  However, Boris and Natasha decided to get sick and couldn't go to Daycare on Wednesday and Thursday, which blew a lot of that out of the water.

They were healthy enough to go to Daycare on Friday and Nightingale managed to purge a bunch of toys from the attic and other play areas.  We dropped off a big load at the Salvation Army on Saturday on the way to Taste of Polonia. 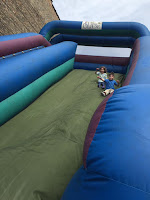 For once, the weather was just right for this event.  Not too hot, not too cold, no rain (well a little late afternoon once we decided to leave).  We put our kids in the bounce house and they spent a good combined 3 hours there burning off energy.  Last year it was too hot and it had rained the day before so the houses were a little waterlogged. 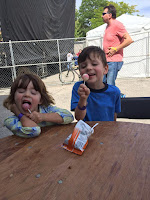 The other thing that made it easier as it was just us.  While we love meeting up with someone, the downside to that is balancing agendas.  Since it was just us we didn't have to worry about seating for a lot of people or who wanted to do what.  We just took turns looking at things and then spent a boatload of money on Polish food.

I did run into a pseudo-friend from the No-Name Software Company.  This was a person who I thought we were better friends but I overestimated my value.  A couple years ago at the annual event, we were chatting and she asked if I was staying for dinner.  I wanted to catch up and get the backstory and company gossip but didn't realize that she was just making conversation.


Sunday it rained in the morning so it wasn't conducive to go outside.  We let the kids stay in which was more for our benefit than theirs. 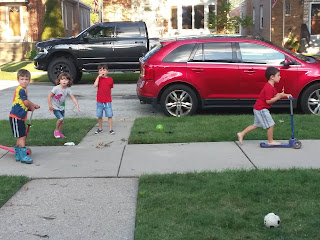 On Monday we met Katness at a pool in Wilmette and even though it was colder than normal, we managed to make it until about 2:45 pm.  Then we went back to her place and had a cookout for dinner.