Well it's official: The months, weeks and days have dwindled down and now Icarus is married! My blogging was rather infrequent to begin with and now because of some events over the last year, or so, I've become even more inconsistent. 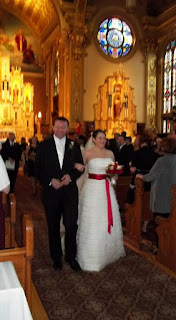 Because Mrs. Icarus had schedule issues with work and school, our original plan was to take a minimoon after our wedding followed by a longer honeymoon next spring.  the minimoon would have been a 3-4 day/night trip someplace warm, tropical and hopefully all inclusive.  Then in the spring, before starting her new job, we would go to Europe for a much longer vacation.  Ironically, because I changed jobs this summer, we didn't have the luxury of a lot of vacation time for me, so our plan got changed.
We went to the US Virgin Islands for our honeymoon because someone forgot to renew her passport in time to go anywhere else that didn't require a valid passport and a handwritten letter from those who signed the Patriot Act.  What was going to be a few days turned into a 5 day trip in the event we don't get to go anywhere else for awhile because of babies,or the economy, or babies, or future douchbag bosses.

One part of the plan we did stick to was not leaving for our honeymoon right after our wedding.  From talking to others, we learned that having an extra day to just sleep in, relax and decompress was a good thing.  Unfortunately, we chilled out too much and didn't get to packing until late Monday night.  This made for some bad packing decisions.
Our airline charged for bags, both carryone ($46) or checked in ($50). Out of fear that a bag would get lost, Mrs Icarus decided that we should carry our bags on.  So we didn't pack things like sunscreen and bug spray which we can get rather cheaply and in bulk here in the midwest. 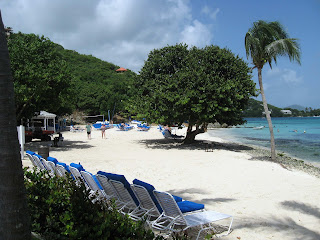 Tuesday we caught a very early flight with a layover in Ft. Lauderdale. We decided to kill some time in the only bar in our terminal -- probably in the entire airport -- and have some expensive cheeseburgers and beers. As luck would have it, a dude sat next to us and started chatting us up. Turns out Jason lives and works in the Virgin Islands. He is a bar tender at a bar called the Greenhouse.

When he found out we were married, he bought me a beer. MR I was still working on hers.I'm a cautious bystander, friendly but not too friendly. I figure if someone is trying to get to know me, it cannot be for any good reason.

Jason did give us some good advice. He told us about the Safari Bus, which is much cheaper than taxis. He also clued us in on the Good Morning/Afternoon/Night greeting that some locals seem to adhere to. It is probably more prevalent outside the resort we were at. He mentioned a K-mart but was distracted by something we didn't get the exact location. He actually was sitting a couple rows ahead of us on the airplane, chatting up his nearby seat mates before he passed out from sheer exhaustion.