So Thursday came and it was to be our Big Day of Fun. We had scheduled parasailing in the morning, a half day sail and snorkel tour in the afternoon, and a couples massage in the early evening.

One of the contradictions of being on vacation is the tug of war between structure and unstructured. You're supposed to be on your honeymoon without a care in the world. At the same time, you want to make the most of it and to do that, you kinda have to give some thought to planning your days so that you can fit in the activities you want.

It's hard enough to balance that on your own, but when the people you rely on to help you are actually working against you, it takes on an added dimension in crazy. Each morning, Sugar Bay provided a sheet of daily activities that are going on at the resort. Looking at the sheet I saw that they had free introductory scuba lessons in the pool at 10 am that morning (Wednesday).

Had I looked at the sheet from Tuesday when we arrived and compared it with the sheet from Wednesday I would have seen that many of the activities repeat. This wouldn't necessarily prove the scuba was every morning, but it would have been more reliable than the method I did employ. 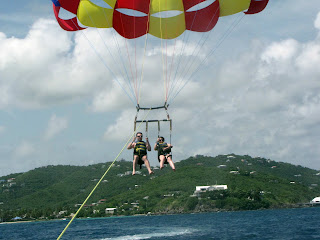 When trying to plan our activities, I asked the Tour Chick (Missy) if the scuba class occurred every day. She said she didn't know. It struck me as odd that she worked at that hotel every day and she didn't know about the scuba class. I mean she sells scuba tours. Wouldn't that be a great feed into her business? One of the reasons people opt to skip scuba is because you spend half the tour getting day certified.

"Hey take the free lesson at the pool and then come see me, I'll set you up with a tour where you get to see so much since you'll already have a head start."

Anyway, Nightingale didn't want to risk missing our parasailing tour. We decided to just sit by the pool, have some rum drinks as soon as the bar opened, and wait for our tour. Of course that didn't stop me from talking to the scuba dude, lets' call him Jeff. Jeff looked about 50 but was probably really in his 60s.

No one had shown up for today's class and he said that if he doesn't get any takers by 10:15 he gets to split. I asked Jeff if we would have time to take the lesson and then make it to the beach by 11 for our parasailing lesson. The beach, which was 100 yards away. "I don't know," he said. "maybe, maybe not."

Okay then. You give lessons every day and you don't know if it will take longer than an hour to show two people the basics of scuba. Really?

Finally around 10:50 we go over to the beach and even though its a small beach, it occurs to us that it would be very possible to be in the wrong spot since all we know is to look for a green boat that says parasailing tour on it.

Fortunately there is a guy from the hotel working the area and he tells us that we should look for a green boat that says parasailing on it. Excellent! With such great customer service like that I wish we could stay another week.

Half an hour goes by and we do not see the boat. We ask Captain Helpful if he could use some of this fancy 20th century technology like the walkie-talkie in his hand or the cell phone clipped to his belt to find out about the boat. Turns out, it was delayed by the Coast Guard.

We were starting to get worried that our para sailing would not finish in time to get us back to catch the boat for the half day snorkel & sail. Turns out we had nothing to worry about.  The para sailing doesn't take long, especially if there are only two people going. 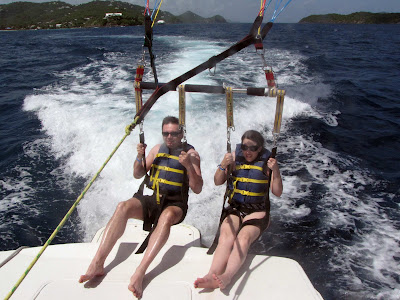 Sidenote: one of the crew members looked like Sawyer from Lost.  I kid you not.

What we learned is that a lot of people on this Island are very cut throat. Not everyone, certainly not the para sailing crew, or the snorkel crew (see future posts) or even the Snuba lady, but a lot of the people who broker these excursions seemed to have a look out for themselves attitude that contridicted the concept of "On Island Time."

Instead of helping each other out, they are trying to prevent one another from taking any of their customers away.  Because we signed up for two events with Missy, you'd think she could let poor Jeff teach us to scuba in the resort pool for an hour. Or you'd think Jeff would let us go parsail since that shouldn't take anything away from him. Instead of working together, they all seem to be islands of their own.
Posted by Icarus at 10:53 AM

Email ThisBlogThis!Share to TwitterShare to FacebookShare to Pinterest
Labels: honeymoon