The trip was not without drama, or at least a very light version of Drama. First off, we traveled 300 miles to the Motor city in hopes of being able to work in some time with the little monkeys nephews and some of Nightingale's friends. However, as is life, her friends couldn't make the additional 20-30 minute drive to meet up anywhere near our hotel.
Second, while the trip had been on the books for months, there was a brief "scare" that her sister and our brother-in-law would be in Chicago because someone finally agreed to rent their house and they need to move their furniture out of it.


Finally, because two of our travel companions brought there 14 month kid along, it was decided that we would order dinner from the hotel restaurant and eat in their suite. The ambitious plan was to order ahead of time and have the food brought up when we were ready to eat.

That plan changed, ostensibly because the restaurant told B that it would only take 15-20 minutes to put the order together, but really because someone dropped the ball on putting the order in.  I was a little annoyed because if we were going to have to pick up our order ourselves, instead of going in on one check, we could have each called in our own order.  That avoids the drama of who owes how much especially for those who somehow believe that a $20 will cover an $18 meal, tax and tip. 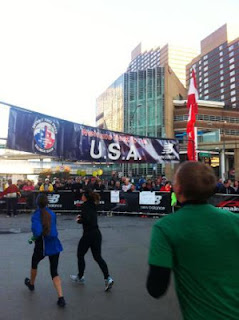 When we called, they said they were slammed and it would take 30-40 minutes. We waited 40 minutes and then went to pick up our order...and still waited 20-25 minutes. They kept coming by and telling us it was almost ready and would we like anything to drink while we waited.  Sure, we'd love to down some overpriced watered down drinks while we wait for you to prepare our order that you obviously just started putting together when we walked in.

On top of that, the food was marked up and cold. Luckily K had the web menu print out which showed the correct price.  The manager comped us $50 for the difference and the wait.  As we were gathering our bags, the bar tender told me that they had marked up the prices because of the marathon.

I cannot begrudge them that.  Restaurant bars are in the business to make money and drinks are usually 30 - 50% of their revenue, a statistic I totally made up.  People running a marathon are not known for pounding down the cocktails on race night, so it makes sense that they would try to make up some of the lost revenue by upping the price.

What I can rip them on Yelp for is the fact that the food not only was room temperature when we got it, but also not very good.  Neither the quality or the quantity justified those prices.